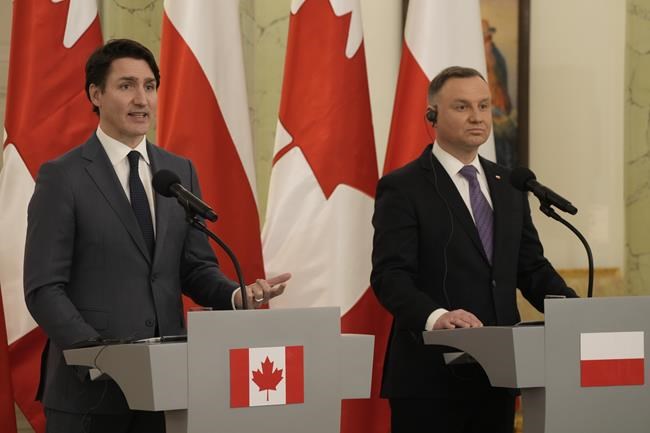 WARSAW, Poland — As Prime Minister Justin Trudeau prepared to speak to reporters before departing Warsaw on Friday, the Russian war on Ukraine appeared to be entering an ominous new phase.

Russian airstrikes on cities in western Ukraine signaled an attempt by its forces to expand its attack beyond the country's other regions further north and south.

Meanwhile, satellite imagery showed a long convoy of artillery that had been lined up near the capital of Kyiv seemed to be dispersing into nearby towns and forests.

The continent, and indeed the world is still reeling from the Russian airstrike on a Mariupol maternity hospital that has been widely denounced as a war crime.

The U.S. and other western countries were poised to follow Canada’s lead by revoking Russia’s favoured nation trading status, which will mean higher tariffs on Russian imports.

Trudeau met Thursday with Polish President Andrzej Duda, who told him that 100,000 people are coming from Ukraine into Poland every day, swelling his population by 1.5 million refugees.

The prime minister came face to face with the crisis when he spent time with more than a dozen refugees in a Warsaw hostel.

Trudeau also visited London, Berlin and Riga, Latvia, over the past week and spoke with leaders about how to ramp up pressure on Russia to end its invasion of Ukraine.

Canadians may soon get to hear directly from Ukrainian President Volodymyr Zelenskyy, who has agreed to address Parliament next Tuesday at 11:15 a.m. eastern time.

This report by The Canadian Press was first published March 11, 2022.