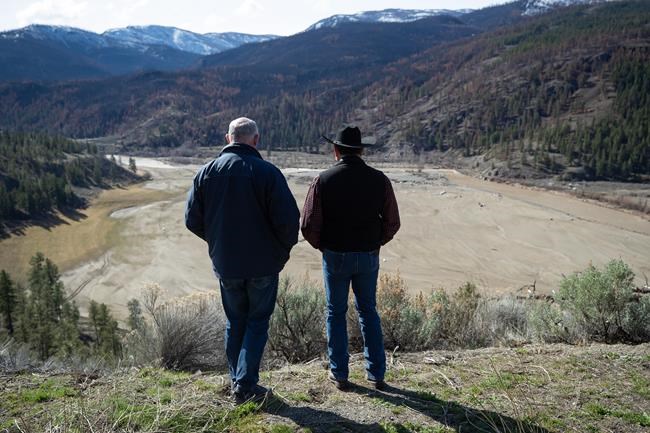 SHACKAN FIRST NATION, B.C. — The chief of a First Nation in British Columbia's Nicola Valley that was evacuated by both wildfires and floods last year says he wants more land for the community in a safer area.

Chief Arnie Lampreau of the Shackan Indian Band told B.C. Public Safety Minister Mike Farnworth and Transportation Minister Rob Fleming during their visit on Thursday that the threat of extreme weather is a constant concern.

“At the end of the day, I don’t want to have to sleep with one eye open or have to be running again,” Lampreau said.

The Shackan Indian Band, based along Highway 8 between Merritt and Spences Bridge, is among several communities facing difficult questions about how best to rebuild after disasters that the government has linked to climate change.

After a summer wildfire destroyed the nearby community of Lytton, B.C., a series of heavy rainstorms pummelled the area in November, causing the river to swell and whole sections of the highway to slump off the hillside.

It was the effect of so-called atmospheric rivers that washed over southern British Columbia, destroying sections of all the major highways linking Metro Vancouver with the Interior and spilling over dikes to flood farmland in Abbotsford.

The nation declared a state of emergency on Nov. 15 to implement an evacuation order for all 45 properties on its reserve. It was lifted in February for most residents.

Lampreau said he often weighs the cost of building temporary structures and protections for the land against moving.

He stood at a pullout Thursday on the side of the highway flanked by Farnworth and Fleming, who were making their first visit to the area more than four months after the floods.

The chief pointed across the Nicola River to remnants of a bridge swept away in the floods. It leads to a section of Shackan’s reserve lands where seven households haven't been able to go home.

Lampreau is among them, living in temporary housing at a Trans Mountain pipeline work camp.

"That's one of the reasons why I brought you guys out here, you get to see the devastation," Lampreau told the ministers. "You've seen it from the air," he said, referring to a flyover they did of the area previously, "but when you come here, it's different."

Farnworth said after the tour that the significant loss of land is "unacceptable."

"The land issue is a big one and it's an issue they have been talking with the province, but also the federal government about," Farnworth said.

Indigenous Services Canada and Crown-Indigenous Relations did not immediately return a request for comment.

"We're working with the community, we're looking at different places that might be suitable," he said, adding that it is still "very early" in the process, which would also involve the federal government.

However, Fleming said restoring Highway 8 has been particularly challenging.

"Highway 8 is the trickiest," he said. "Literally seven kilometres of it disappeared into the river. We've driven on some stretches of it today that had disappeared that have been rebuilt."

He couldn't provide an estimate for a full reopening, but said more information would be released in the coming months in partnership with the federal government.

Rebuilding it "right" will mean using traditional knowledge as well as engineering strength in a way that adds social and economic benefits to the community, he said.

Meeting survivors and seeing landscape in person made the impact of the wildfires and floods hit home, Fleming added.

"It's really real to see and meet with people who've lost their homes and lost all the things that were valuable to them," he said.

The ministers arrived at the Shackan reserves as part of a tour that was also expected to include other First Nations made up of the Scw'exmx, meaning "people of the creeks."

This report by The Canadian Press was first published March 25, 2022.