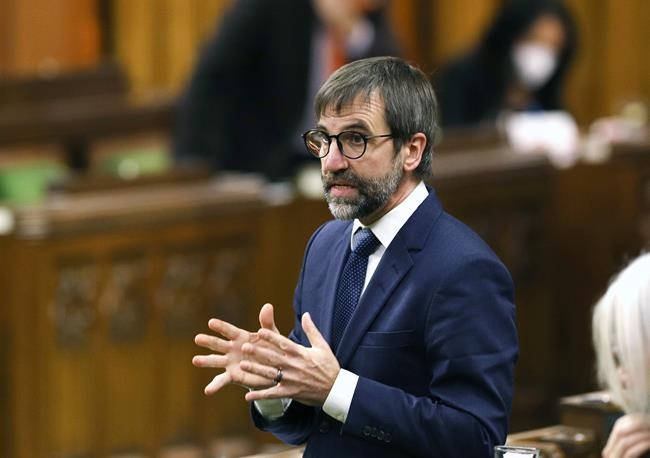 OTTAWA — Prime Minister Justin Trudeau told the Canadian oil industry Tuesday that it should use the massive bump in profits from the current surge in prices to fund a transition to cut their emissions.

The federal government unveiled an emissions-reduction plan to reach its new greenhouse-gas targets by 2030. It projects the oil and gas industry needs to cut emissions 42 per cent from current levels if Canada is to meet its new goals.

Speaking at the Globe Forum sustainability conference in Vancouver, Trudeau said it is a "clear, reasonable contribution" for the sector to make and that the money is there for it to be done.

"With record profits, this is the moment for the oil and gas sector to invest in the sustainable future that will be good for business, good for communities and good for our future," Trudeau said.

"Big oil lobbyists have had their time on the field. Now, it's over to the workers and engineers who will build solutions."

The plan uses economic and emissions modelling to gauge the most affordable and feasible projects when it comes to Canada's target to cut emissions by 2030 to no more than 60 per cent of what they were in 2005.

In 2019, Canada produced 730 million tonnes of carbon dioxide, or its equivalent in other greenhouse gases such as methane and nitrous oxide.

Since 2005, oil and gas emissions have increased 20 per cent to 191 million tonnes. The new plan wants them to fall to 110 million tonnes by 2030. They haven't been that low in more than three decades.

Environment Minister Steven Guilbeault insists this is not the cap on oil and gas emissions the Liberals promised as part of the fall election platform. It is a projection of what the government believes is possible, and will inform but not dictate the final cap that will be legislated or imposed through regulation after it is set.

Several environment organizations say Canada's overall target is still not ambitious enough and that the oil and gas sector isn't pulling its weight.

"Tackling climate change must be a team effort, but the plan released today shows that some players are still sitting on the bench," said Caroline Brouillette, national policy manager at the Climate Action Network — Canada.

Atiya Jaffar, Canada digital manager with 350.org, said the plan doesn't keep up with the science and the fossil-fuel target is "appallingly low and nowhere close to the fossil fuel industry's fair share."

Kendell Dilling, interim director of the Oil Sands Pathways to Net Zero Alliance of the six biggest oilsands companies in Canada, said the plan is "an ambitious challenge" for the sector and the companies are reviewing it to see how it lines up against their current plans.

"Although there are differences between the ERP and our plan, it’s clear we agree on the need to reduce emissions significantly by 2030 and that collaboration is essential for us to meet our goals," she said.

Conservative environment critic Kyle Seeback said he is "deeply concerned" about the economic impact of the plan, and said the Liberals can't be trusted to actually implement it.

"I don't think they're going to meet these targets, because they don't have a track record where they meet any targets," he said. "What we do know is that the cost of some of the things that they've put in this plan are going to be economically disastrous for Canadians."

NDP Leader Jagmeet Singh said the plan is not ambitious enough and is too focused on aid to the fossil fuel sector.

"When will this Liberal government respond to the crisis of the climate crisis with the urgency that it deserves?" he asked in question period.

The plan includes $9 billion in new spending mostly to expand existing climate action grant and loan programs, including another $1.7 billion for electric vehicle rebates. More details on the new spending are expected in the next federal budget when it is tabled later this spring.

The plan also promises a tougher schedule to shift Canadian vehicle sales to electric models, mandating one in five new passenger vehicles be battery-operated by 2026, 60 per cent by 2030 and 100 per cent by 2035.

Guilbeault said it will take a little longer for transport to catch up to other sectors on cutting emissions. Transportation accounts for one-quarter of all emissions, and its carbon footprint has increased 16 per cent in the last 17 years.

The report says by 2030 the sector should be able to cut emissions 23 per cent from current levels.

The government will also aim for one-third of medium- and heavy-duty vehicles sold to be electric by 2030 and 100 per cent by 2040.