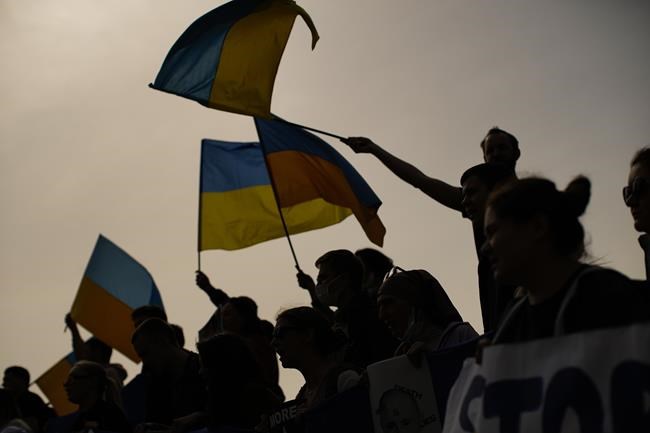 OTTAWA — Canada is sending additional RCMP officers to assist the International Criminal Court investigation into possible war crimes by Russia in its invasion of Ukraine.

Mendicino said they have "the skills and the expertise to help collect evidence and to marshal a case to bring charges on war crimes or crimes against humanity in a subsequent prosecution." The investigation is part of an effort to hold Putin to account for an illegal and egregious invasion, he added.

"And part of the exercise of holding him accountable is ensuring that we preserve the record that we collect, the evidence of what has happened and what is continuing to happen in Ukraine and doing that in real time."

The move comes as negotiators from Russia and Ukraine met Tuesday in Turkey in an attempt to end the invasion that began on Feb. 24, forcing 10 million Ukrainians from their homes, including 3.8 million that have fled the country.

Ukraine has proposed that it would remain a neutral country, but its security would be guaranteed by a group of countries in a fashion similar to NATO's Article 5, which specifies that an attack on one is an attack on all.

Prime Minister Justin Trudeau Trudeau said Tuesday he discussed those issues in a phone call a day earlier with President Volodymyr Zelenskyy, but he brushed aside a question about his view of the Ukrainian position and whether Canada had a role to play as a security guarantor for Ukraine.

"The bottom line is Canada will continue to be there to support Ukraine and stand against Russia every step of the way. We're in talks with allies and partners in NATO and elsewhere about how the best path forward is on that," he said.

She said the Canadian efforts are focused on strengthening Ukraine's position at the bargaining table by providing its forces with more weapons and by imposing more sanctions.

"This is reinforcing Ukraine at the table of negotiations and our goal is to make sure that they're in a strong position as they're fighting for their freedom and at the same time as diplomacy is continuing."

In a tweet about his conversation with Joly, Kuleba said he believes Canada's support for his country "remains ironclad. We agreed on the need to further strengthen Ukraine's defence capabilities, apply more severe sanctions on Russia."

In a speech earlier in the day in Vancouver, Trudeau said nothing short of a full withdrawal of Russian troops from Ukraine is required to find a resolution.

"People ask me how this will end. I can tell you, that's not what Ukrainians are asking. They're talking about how this must end: a full withdrawal of Russian troops, and peace, democracy, freedom and sovereignty restored."

Trudeau said Canada and its allies would remain steadfast in their support of Ukraine by continuing to provide military, economic and humanitarian aid, as well as safe haven for civilians fleeing the country.

"We must remain resolved to punish this criminal invasion with catastrophic sanctions on Putin and his inner circle to make them pay, for as long as it takes. If Putin thinks we don’t have the staying power to see this through, he is dead wrong," said Trudeau.

He also said there will be challenges and pain for democratic countries such as Canada as the war in Ukraine leads to higher food and energy prices.

"But others in the world may face outright shortages and famine. While Ukrainians themselves fight for their lives and pay with their lives."

Russia, meanwhile, has announced it will significantly scale back its military operations near Kyiv and the northern city of Chernihiv to build trust during the talks after several unsuccessful rounds. The United States and other allies greeted that news with skepticism.

The apparent show of good faith by Russia comes after its advance on the Ukrainian capital has effectively stalled in the face of a military resistance that has exceed the expectations of both the country's invaders and its Western allies.

"This is #putin retreating to the East for you … the sound of war is loud and clear," she wrote.