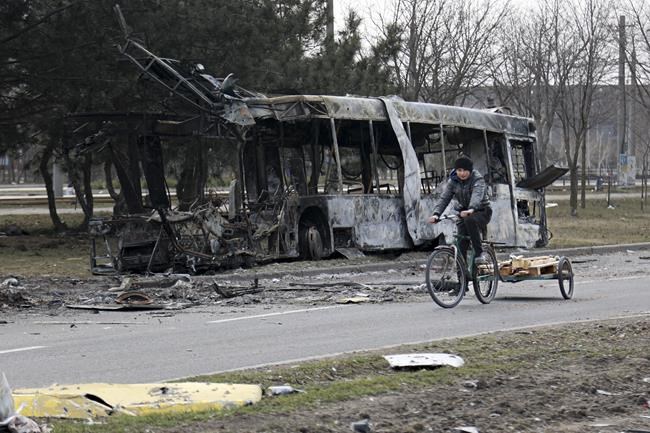 OTTAWA — Russia's blocking of humanitarian aid to Ukraine and its bombing of medical facilities should be the subjects of an international war crimes investigation, says Canada's international development minister.

Harjit Sajjan offered that view as a half dozen extra RCMP investigators head to The Hague to assist in the International Criminal Court investigation of alleged war crimes and crimes against humanity by Russia in its invasion of Ukraine.

"I have worked enough conflict areas and war zones to understand what international humanitarian law is. This is something that does need to be investigated. Civilians are not supposed to be harmed. That also includes when civilians need medical support, food support," Sajjan said in an interview.

Sajjan, a former defence minister and Canadian Armed Forces veteran of the war in Afghanistan, was speaking ahead of the International Committee of the Red Cross announcement Thursday that it would be ready to start evacuating citizens from the besieged port city of Mariupol on Friday.

"For logistics and security reasons, we'll be ready to lead the safe passage operation tomorrow, Friday, provided all the parties agree to the exact terms, including the route, the start time, and the duration," the ICRC said in a statement on Thursday.

"It's desperately important that this operation takes place. The lives of tens of thousands of people in Mariupol depend on it."

Relentless Russian attacks on Mariupol have reduced massive sections of the city to rubble and have blocked efforts to get food, water and medicine to its estimated 430,000 residents, amid reports that some may have been abducted by invading troops.

Canada's Parliament and others recognize as a genocide the acts perpetrated by Joseph Stalin that killed millions of Ukrainians in the 1930s, a tragic chapter of which Sajjan is mindful.

"The Ukrainians already have seen another Holocaust in their past with the Holodomor where the population was starved to death," he said.

"This is just another time now, Russians using kind of a different tactic here. So, I hope that everything will be investigated thoroughly in this regard."

Sajjan said carving out the corridors needed to get humanitarian supplies into Ukraine has been a difficult undertaking. Even when routes have been cleared, convoys have had to deal with booby traps and other hazards, he said.

"Every time you try and co-ordinate something, it's been used for the Russians to start targeting folks in the corridor itself."

Sajjan has travelled throughout eastern Europe to liaise with Canadian allies and international agencies, including the United Nations High Commissioner for Refugees and the World Food Program. The food program reported recently it had helped feed its one millionth displaced Ukrainian.

An estimated 10 million Ukrainians have been forced out of their homes, while almost four million have sought asylum as refugees in the worst humanitarian disaster in Europe since the Second World War.

In a separate interview, Public Safety Minister Marco Mendicino said the RCMP officers dispatched to assist the prosecutor's office of the ICC — joining Mounties already deployed there on various investigations — will be seized with documenting the atrocities that are "continuing to occur in real time" in Ukraine.

Mendicino said he expected them to focus on digitally recording the destruction while eventually gathering testimony from the Ukrainians who have fled attacks.

"They are all living witnesses to what's happened in Ukraine," said Mendicino.

"Even while we continue to provide military aid and impose economic sanctions and (create) humanitarian corridors to allow those who are fleeing those atrocities to survive, we have to preserve the record."

Trudeau said the G20, which also includes China, might include different countries with different approaches and "political structures" but its main function is to "manage and encourage economic growth."

"The bottom line is it can't be business as usual to have Vladimir Putin just sitting around the table pretending that everything is OK, because it's not OK and it's his fault."

Trudeau and Deputy Prime Minister Chrystia Freeland welcomed a delegation of five Ukrainian MPs for further discussions on what Canada can do to help Ukraine's democratically elected government survive the Russian invasion.

"We want to be a symbol of victory, for democratic growth, for democratic values," said Lesia Zaburanna, the delegation chair. She said it was a difficult decision "for us to leave our home, our people … but we have to because it's our duty."

This report by The Canadian Press was first published March 31, 2022.