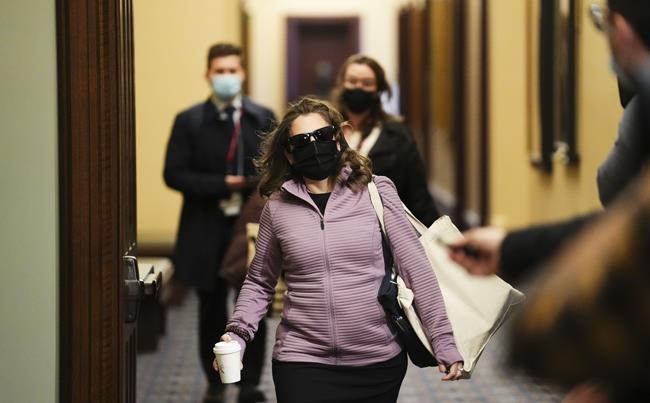 OTTAWA — After two years of pandemic-induced uncertainty, the federal Liberals are getting ready to deliver an updated spending blueprint in a 2022 budget that, by all accounts, has been influenced by fast-changing circumstances.

The result of a tumultuous few weeks is scheduled to be released Thursday, but experts note the uncertainty has not gone away.

High inflation rates may climb further. Unemployment is low, but labour shortages are widespread. Housing prices are rising at paces not seen in years.

And the war in Ukraine continues to send ripples through the global economy and threaten security.

A former Liberal budget director said the government should be careful how it earmarks billions in expected new spending with so many bumps on the economic road ahead.

Robert Asselin, senior vice-president of policy at the Business Council of Canada, says policy-makers never know what will happen and should be careful not to inflame key issues facing the country.

When Finance Minister Chrystia Freeland laid out the broad planks of this year's budget in late January, she spoke about boosting the country's economic potential, addressing housing affordability concerns, funding the transition to a green economy and minding high inflation rates.

Inflation rates then rose to a three-decade high in February, and prices have climbed further. The cost of living has become a top economic concern for Canadians, even though it has the effect of padding federal revenues as well.

Still, Asselin said, federal spending that adds to demand in the short term may only pour more gas on the inflationary fire.

"Spending this buffer that the economy is giving them … would be very irresponsible in my view because then you become less prepared for the next crisis," he said.

The next crisis arrived at the end of February when Russia invaded Ukraine.

The fighting upended global security and created a new budget priority for the Liberals to boost defence spending along with other NATO allies.

On Wednesday, the Liberals voted in favour of a Conservative motion in the House of Commons that called on the federal government to increase defence spending to at least two per cent of Canada's gross domestic product.

The motion, which did not include a timeline, passed 303-27, with NDP and Green MPs voting against it.

The impacts from the fighting in Ukraine reach beyond the defence budget, said Elliot Hughes with Summa Strategies, pointing to energy prices, geopolitics and international business decisions.

"Ukraine has essentially, in some ways, thrown the government a little bit off course and off schedule in their ability to pull together what I think is what's needed … which is a well-thought-out economic growth strategy," said Hughes, who worked as an adviser to Liberal finance and defence ministers.

The economy has fared better than anticipated over the past few months as it churned out growth and shrugged off the Omicron wave in January to see a quick rebound in job numbers.

That rebound along with higher oil prices is expected to pad the government's bottom line and offset any new spending to be announced.

Some economists argue the Liberals shouldn't pivot to austerity, noting pockets of weakness in the labour market for low-wage and older workers underneath positive headline figures showing an almost full labour market recovery from the onset of the pandemic.

The Liberals planned to use the jobs market to anchor budget decisions among other measures like a declining debt-to-GDP ratio, which Prime Minister Justin Trudeau pointed to Wednesday as a core guardrail on spending.

"Our economy's operating at full capacity," he said in an interview.

"I think there needs to be a real return to fiscal responsibility, some fiscal prudence in this budget."

The Liberals' deal with the New Democrats to land that party's support in key parliamentary votes committed the government to billions in new social programs.

The majority of the items in the deal were already reflected in Liberal campaign pledges that could amount to $48.5 billion in net new spending by 2026, said Rebekah Young, Scotiabank's director of fiscal and provincial economics.

But promises for pharmacare and dental care, depending on how they are implemented, could add up to $20 billion more in spending over the three-year life of the deal, she said.

Trudeau didn't give any hints about what measures might be in Thursday's budget, but didn't suggest the spending taps would be closed.

"The way the economy has come roaring back in Canada, stronger and faster than many other places in the world, is because we were there to support Canadians," he said, "and we are making sure that we continue to be fiscally responsible."

This report by The Canadian Press was first published April 6, 2022.

— With files from Mia Rabson