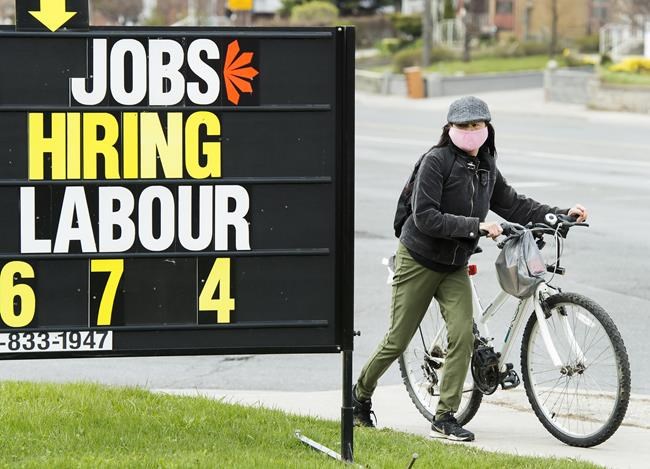 OTTAWA — Canada's unemployment rate dropped to a record low last month as more people jumped into a hot labour market — and economists say the jobless rate could yet fall even lower.

The March unemployment rate registered at 5.3 per cent, down from the 5.5 per cent recorded one month earlier as the economy added 72,500 jobs.

Statistics Canada said Friday it was the lowest jobless rate since comparable data became available in 1976 and down from the previous low of 5.4 per cent in May 2019. It was also a turnaround from the early days of the pandemic in May 2020 when the unemployment rate hit a record 13.4 per cent.

CIBC senior economist Andrew Grantham said oil-producing provinces like Alberta and Saskatchewan were not at full employment before the pandemic struck and may have space for more job gains.

"There is scope maybe for the unemployment rate to grind a little bit lower," he said.

"That means that there's a little bit of scope for employment growth to continue to outpace population growth, but just not to the same extent that it has recently."

Driving the unemployment rate down last month were gains in a variety of sectors. Key to the gains were 24,500 women over age 55 finding work and 35,300 core-aged men between 25 and 54 taking jobs, primarily part-time.

RSM Canada economist Tu Nguyen said wages could move higher with inflation on track to reach its highest point since the early 1980s, which could also be driving some retirees back into the job market.

"On a fixed income, they're struggling to make ends meet ... and there are a lot of jobs out there right now," she said.

A growing number of older women have entered the labour market since January, but standing in the way of more is a lack of skills training opportunities. That makes this group different from younger women facing child care hurdles, said RBC economist Carrie Freestone.

"These are the groups of women, too, that were most vulnerable to the coronavirus and ... don't necessarily want to go back to high-contact jobs, but still are seeking employment," Freestone said.

"In that situation, mature women are more likely to need that additional upskilling and reskilling especially nowadays with how tech-forward a lot of positions are."

Despite the gains for older workers, the employment rate for those over 55 was 1.2 percentage points lower in March than in February 2020.

Katherine Scott, senior researcher with the Canadian Centre for Policy Alternatives, said the figure could be a combination of multiple factors. She pointed to population aging and older women retiring, dropping out to care for family members, or working in low-wage jobs that have yet to fully recover.

"So dropping out of the labour market in your mid- to late-50s, can set you up for very economically challenging senior years."

With over 900,000 job vacancies as of January, which are the most recent figures available from Statistics Canada, the jobs report notes that another potential pool of workers are those aged 55 and older. Overall, job gains for that group amounted to 39,300 in March.

Statistics Canada said the unemployment rate last month would have been 7.2 per cent had it included people who wanted a job but did not look for one, falling to pre-pandemic levels for the first time.

Since hitting a peak of 1.5 million in April 2020 at the onset of the COVID-19 pandemic, the number of people wanting work but not actively looking has fallen to 377,000, similar in size and proportion to the overall labour force witnessed in the month of March in each of the three years before 2020.

Just over one-quarter didn’t look because of an illness or disability. A further one-fifth were part of a group waiting for a recall or reply from an employer, or who didn’t think there was anything available. Nearly an additional fifth pointed to personal and family responsibilities as the reason they paused their job search.