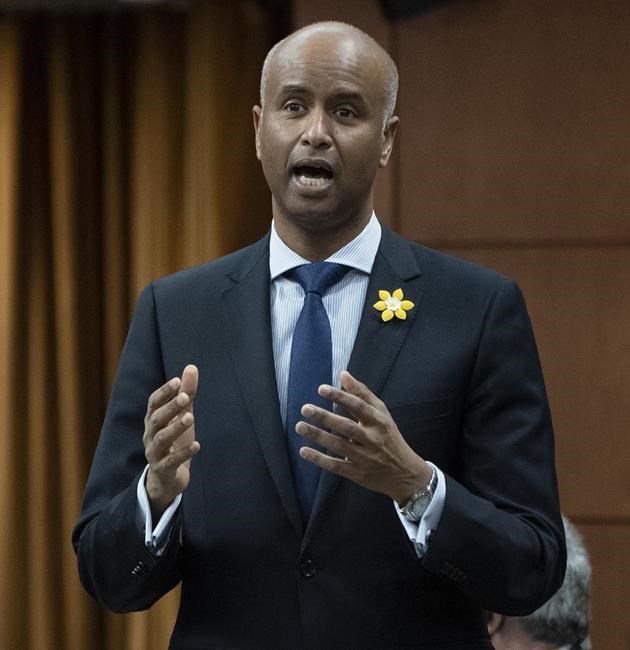 OTTAWA — Canada's housing minister says federal funding to ramp up the pace of new builds will also look to target the kind of homes required to meet the changing needs of Canadians.

Housing Minister Ahmed Hussen said the budget's plan to double housing starts over the next decade will aim to incentivize the construction of units needed by seniors who are downsizing, for example, as well as newcomer families.

Last week's budget unveiled some $10 billion in new spending on housing, on top of the national housing strategy unveiled in 2017 that now carries a price tag north of $70 billion.

Much of new spending is focused on boosting the supply of homes that the government says has lagged behind the pace of population growth and helped drive up historically high prices.

Canada's population over the past five years grew at almost double the rate of any other G7 nation. The latest census figures show that of the 1.8 million more people here in 2021 compared with 2016, four in every five were immigrants.

The government has unveiled ambitious immigration plans to boost the number of newcomers in the coming years, and Hussen said those plans could be threatened absent a similar jump in housing starts.

The Liberals' latest immigration targets would see more than 1.3 million new permanent residents settled in Canada by 2024, and keep adding apace to offset low birthrates and an aging population.

"We realize that housing is becoming … a threat to our ability to not only integrate folks but to also economically develop regions in Canada," Hussen said in an interview.

"Housing, although it can be seen as a challenge, it's also an opportunity for us to grow."

Home prices have continued their rise through the pandemic as rock-bottom interest rates and desire for more space fuelled demand.

The latest figures from the Canadian Real Estate Association showed the average national home price was a record $816,720 in February, up 20.6 per cent from the same month one year earlier, and heavily influenced by sales in and around Vancouver and Toronto.

Figures for March will be released next week.

The Liberals are hoping to unlock new development primarily through a $4-billion, five-year fund for cities to cut red tape and speed up approvals for new developments.

The government believes that upping supply will over time alleviate price pressures in the market, and the pay-for-performance fund would create about five per cent, or 100,000 new units, of the extra 1.9 million the Liberals want to build over the coming decade.

Hussen said the money would only go to cities that provide what he called a healthier mix of housing, including around transit hubs, and not necessarily all single-family homes.

An online analysis of Statistics Canada data shows there has been a drop in the construction of family homes in favour of smaller units like condominiums.

Mike Moffatt, senior director of policy and innovation at the Smart Prosperity Institute, wrote that a weakness in the budget plan for housing was the lack of emphasis on the need for family-friendly units. He recommended the government set a target for units with three bedrooms or more.

Constructing any new units at the pace the government wants will also require new workers that Hussen noted could include new immigrants.

The latest jobs figures show a steady rise in construction positions, including four straight months of gains up to March that Statistics Canada said coincided with steady growth in building since the fall of 2021.

The government is looking to make sure it can continue that growth, alongside new construction, pointing to promised spending on skills training and immigration, Hussen said.

He said the spending is part of federal plans to build "all kinds of housing across the spectrum," while also keeping an eye on "the necessary skills and the necessary people that will get us there. We have to get that right, absolutely."

This report by The Canadian Press was first published April 14, 2022.