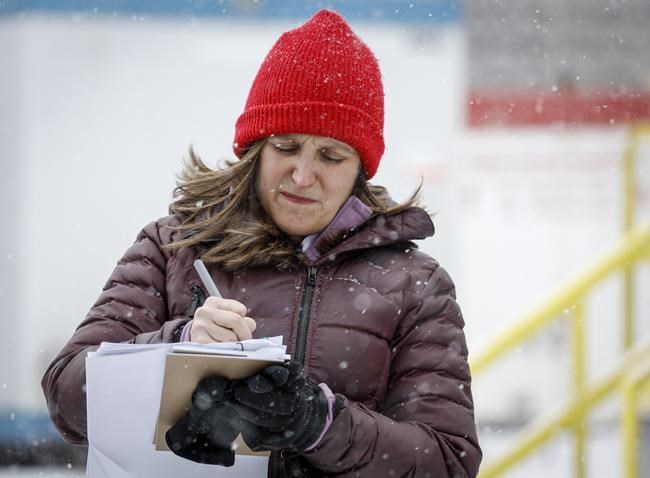 OTTAWA — Small business owners have made a plea to the federal finance minister to consider more help paying off their pandemic-related debts as the sixth wave of COVID-19 causes customers to stay home and sales to fall.

The request is one Finance Minister Chrystia Freeland has faced repeatedly in recent days during a cross-country post-budget tour.

Her response has been that emergency measures are no longer needed with the crisis passed, the economy running hot and the government needing to tighten its fiscal belt.

Dan Kelly, president of the Canadian Federation of Independent Business, said underneath the headline economic numbers only two in five of his members report being back to normal sales.

He said more are worried about the impact on revenues and their ability to repay loans with people staying home despite provinces removing public health restrictions.

His members put those concerns to Freeland during a webinar on the budget and Kelly said he walked away believing the finance minister heard their concerns.

The budget doesn't include any further extensions of emergency benefit programs that will come to a close on May 7, but Freeland told those on the webinar, "I hear you," when asked about debt relief, adding a moment later, "let's keep on talking."

The government has set December 2023 as the deadline to repay those loans with zero interest and benefit for having a portion forgiven, though many small business owners believe they'll need until 2024 to afford the repayments.

"Yes, streets are busier again, yes, the headline economic numbers are positive, but there are loads and loads of small firms — especially in retail, hospitality, the service sector and arts and entertainment — that are still hanging on by their fingernails and are now deeper in debt," Kelly said in an interview.

"There were huge amounts of new spending on almost every line in the budget, and yet for any kind of business support, it was pretty thin."

He said about three-quarters of CFIB members said they didn't find the federal budget helpful, soured by a lack of movement on debt relief and another delay on a promise to lower the fees merchants pay every time a shopper pays with a credit card.

This budget promises to continue consultations promised in last year's budget, which built on an election pledge the Liberals made in 2019.

"I would love to be able to satisfy every single thing that you think you would like to see the federal government doing, but I recognize I'm not doing that and I never will," Freeland told CFIB members.

"What I will say to you is I am always mindful when putting together the budget, when advancing policies, I am mindful and thoughtful about what they will mean for small business."

One positive Kelly saw in the budget was a promise to raise the limit for small businesses to benefit from a lower tax rate, which he said should remove disincentives for small companies to grow.