‘We should be able to manage:’ Provinces experiencing rise in COVID hospitalizations 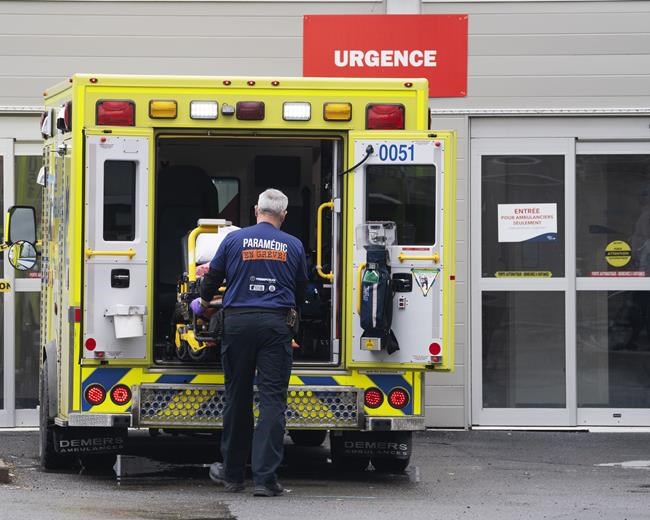 Hospitals across Canada are facing a resurgence of patients with COVID-19 that some health officials say will likely continue for another month.

Latest data from the Public Health Agency of Canada shows hospitalizations due to COVID-19 rose about 18 per cent across Canada between April 4 and April 11 — to 6,020 people needing beds.

In the last week, Quebec, Ontario, Nova Scotia and the Prairies have all reported an increase in hospitalizations from the virus and intensive care admissions have also inched slightly upwards in some provinces.

Latest available data from the provinces shows Quebec had 2,220 people in hospital and Ontario had 1,301. There were 1,053 hospitalizations in Alberta, 403 in Saskatchewan, 158 in Manitoba and 59 in Nova Scotia.

Dr. Eddy Lang, department head of emergency medicine in Calgary for Alberta Health Services, said his province is in its sixth waveof the pandemic fuelled by the BA. 2 sub-variant of Omicron,but it's not as dramatic as the original Omicron surge.

"No one in health care would support the 'let it rip approach,' but in terms of hospitalization capacity, we're not seeing the same strain in our ICU capacity as we did with (the Deltavariant)and we should be able to manage," Lang said Monday.

During the week of Jan. 24, when Omicron's BA. 1 variant was at a peak, there were more than 11,000 people in hospital across Canada, says the Public Health Agency of Canada.

In mid-March, hospitalizations due to COVID-19 came down to 3,878 before starting to climb again.

On Tuesday, Ontario Health Minister Christine Elliott said hospitals in her province are still able to manage the increase in patients, so the Progressive Conservative government isn't looking to expand a mask mandate beyond hospitals, clinics, long-term care homes and congregate living settings.

"(Chief medical officer) Dr. Kieran Moore does not believe at this point that we need to return to everyone wearing masks wherever they are," Elliott said.

"We don't anticipate that this (wave) is going to hit the same heights that we reached in the fifth peak."

The rise in hospitalizations correlates with provinces easing restrictions and public health orders, said Thomas Tenkate, associate professor with the School of Occupational and Public Health at Ryerson University in Toronto.

"The overall question is what level are we happy to accept, and that generally seems to be now based on whether or not the health-care system is overloaded — particularly ICUs and hospitals more broadly," Tenkate said.

"We're at the point where all the provincial governments … are saying we've done the best we can, and it's on you as an individual to decide how much risk you want to take. These are the measures we recommend but we're not going to require these things."

Tenkate said the public can expect COVID-19 to act similarly to a cold or influenza, which flare up during certain times.

"At different times of the year we'll have more peaks. If we're in the sixth wave, we'll have the seventh, eight and ninth," he said. "Whether it's once or twice a year, I don't know."

Lang said the current wave of rising hospitalizations will likely peak in mid-May based on wastewater analysis and data from the United Kingdom.

Dr. Saqib Shahab, Saskatchewan's chief medical officer of health, also projects the latest resurgence will end within the next few weeks. Canadians, in the meantime, have "unfinished business" when it comes to getting vaccinated, he said.

Earlier this month, Shahab said the bulk of hospitalizations in Saskatchewan were being driven by people who remained unvaccinated or who were vulnerable and hadn't received a booster shot.

That aligns with data from the Public Health Agency that shows as of March 27, people with three doses of vaccine made up about 10 per cent of hospitalizations Canada-wide, while the unvaccinated accounted for 61 per cent. About 20 per cent of patients had had two shots.

"Being fully vaccinated in any age group and getting boosted protects you from hospitalization," Shahab said.

"COVID-19 is not something that's going to go away and over time most of us are going to be exposed to Omicron."

Health Canada says people who are vaccinated are significantly protected from severe outcomes from COVID-19, which include hospitalization and death.

This report by The Canadian Press was first published April 19, 2022.

Note to readers: This is a corrected story. Previous version spelled Elliott with one t.