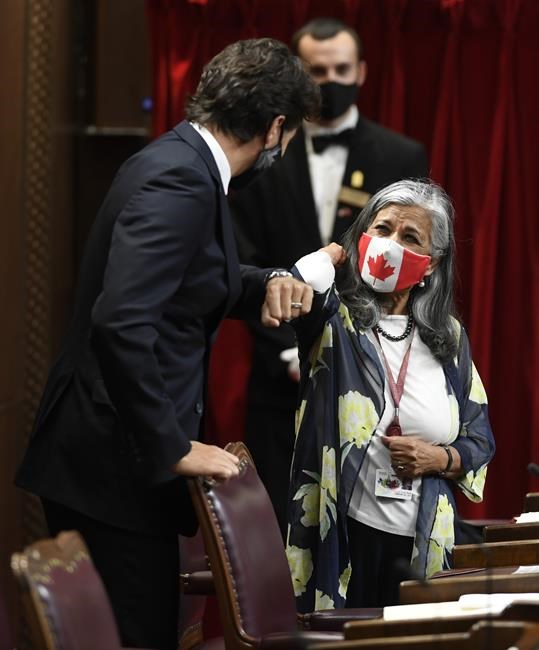 OTTAWA — An independent senator is calling on the House of Commons to fast-track a new law she's proposing that would confiscate billions of dollars of frozen Russian assets and use them to rebuild Ukraine.

Sen. Ratna Omidvar's bill — titled "An Act respecting the repurposing of certain seized, frozen or sequestered assets" — is set to be passed by the Senate, which means it will soon be headed for the House of Commons where elected MPs will decide its fate.

Canada's current array of sanctions laws allow for the freezing of assets but give no legal authority to take that money and use it for other purposes such as rebuilding a battered country.

Canada has joined international allies in sanctioning more than 1,100 Russian individuals and entities to punish President Vladimir Putin and his supporters — rich oligarch enablers — for the Feb. 24 invasion that has reduced vast swaths of Ukraine to rubble and forced millions to flee their homes.

Omidvar said the images of destruction emerging from Ukraine make it essential to enact a law to begin confiscating money before Parliament adjourns for the summer in June.

"I feel the immediacy and the urgency is so important we need to fast-track this bill and call it into law and apply it in the Ukraine situation as soon as we can," she said in an interview.

Under Omidvar's proposed legislation, the frozen moneys would be repurposed to support victims of the Russian attacks. That would be a legal rarity on the international financial landscape.

"Every home that is bombed has victims, and victims who flee, victims who are hurt, victims whose lives are destroyed, and there is absolutely no way of helping them. In the current circumstances, everybody's coffers are empty," she said.

As the G7 finance ministers meeting wrapped Friday in Washington, the group acknowledged that the US$84 billion already spent to help Ukraine since Russia seized the Crimean Peninsula in 2014 is the just the beginning.

"Against the background of the ongoing brutal Russian aggression, the accompanying suffering of the Ukrainian population, and the continued destruction of the country itself, we are prepared to do more as needed," the G7 ministers said.

Standing next to her Ukrainian counterpart Sergii Marchenko in Washington on Friday, Finance Minister Chrystia Freeland said "winning the war and after that, rebuilding Ukraine, will be an immense task. This will be perhaps the greatest political undertaking of this decade for all rules-based democracies. Sergii, I want you to know that Canada will play its part."

Marchenko said he was "eager to find a way" to move frozen Russian assets toward a "Ukrainian fund to rebuild Ukraine, to recover Ukraine."

Omidvar said a key feature of her bill is the creation of a central registry to find where money is hidden, and to help target "enablers" — accountants, lawyers and financial advisers, among others — who are helping rich Russians loyal to Putin stash and launder money.

Though that information is hard to come by, she believes there is plenty of money to be found on Canadian soil.

"Even in the absence of a list, given Canada's good financial governance … we are also a safe haven for dirty money," Omidvar said.

As one example, she cited the Russian oligarch Roman Abramovich, who is a major shareholder in Evraz, a British multinational manufacturing company that operates a steel mill in Regina, Sask.

Abramovich is the owner of a major British soccer team and was a fixture in London high society before he faced international sanctions last month, including from Canada.

"I have no proof," Omidvar said. "But suffice it to say that it is a good guess that in fact Canada's loose anti-laundering laws play into all of this, and that there is going to be money to be found here for repurposing."

Omidvar said she is hopeful she has support across party lines in the Commons to get her bill passed before the summer recess.

She is also encouraged by a commitment, albeit vague, in Freeland's recent budget that signals the government is prepared to take steps to actually seize assets of those who have been sanctioned.

"In partnership with our allies, Canada has formed the Russian Elites, Proxies, and Oligarchs (REPO) Taskforce and committed federal resources to work with our partners, both foreign and domestic, to target the assets and ill-gotten gains of Russia's elites and those who act on their behalf," the budget said.

"This includes the use of resources to identify, freeze, and seize assets to ensure that sanctioned individuals and entities are no longer able to access their resources and wealth abroad."

This report by The Canadian Press was first published April 24, 2022.