Justice minister invokes cabinet secrecy around use of Emergencies Act 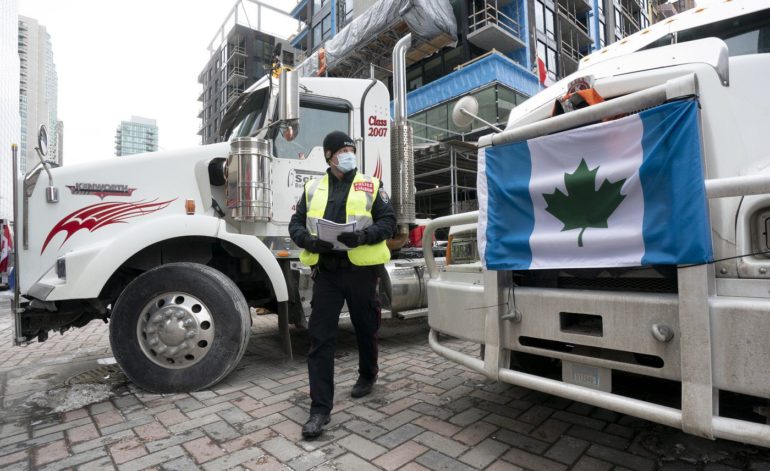 Justice Minister David Lametti repeatedly invoked cabinet confidentiality in his appearance before a special committee tasked with investigating the government’s use of the Emergencies Act.

Lametti was asked pointed questions Tuesday evening about federal consultations with provinces and others before declaring an emergency, and when the government received advice to revoke the declaration. On multiple occasions, he responded that he “would not betray cabinet confidence.”

That has been a central concern for the Conservatives since Monday’s launch of a separate public inquiry into the use of the Emergencies Act. Both the committee and the inquiry are required under the act.

The opposition wants the Liberals to waive cabinet confidence and release all the information the government relied upon in making its decision.

Lametti said his government has tabled documents with the committee that give a clear picture of the decision making.

“I think Canadians will understand that cabinet confidence is a critical part of our cabinet governance system,” Lametti said.

“So the waiving of cabinet confidence is extremely rare.”

Committee member and NDP MP Matthew Green challenged Lametti, saying he had “an opportunity to be honest with Canadians” about the evidence and facts around the decision. He called on the minister to be more co-operative and forthcoming.

“You’re certainly impeding the process through which we can get clarity,” Green said.

Lametti responded that he is also bound by solicitor-client privilege as attorney general.

The Liberal government declared an emergency under the act for the first time in history on Feb. 14, granting extraordinary powers to police to end blockades at border crossings in Ontario, Alberta and B.C., as well as the ongoing occupation of downtown Ottawa.

Another senior Liberal minister said Tuesday the government has to balance “two competing interests” of transparency and protecting national security in deciding what to release.

Government House leader Mark Holland was asked about what information the Liberals will provide to Ontario Appeal Court Justice Paul Rouleau, who’s tapped to lead the independent inquiry. The government has not said whether Rouleau will have access to secret cabinet documents.

That has sparked questions and frustration from civil liberties organizations and opposition parties, who worry the inquiry will not have information about closed-door discussions and decisions by ministers.

Holland said the government will provide as much information as possible so Canadians have “an absolutely crystal clear picture, right up to the point that it’s not injurious to national security.”

He also suggested another special committee could be created to review documents and ensure that what’s released doesn’t jeopardize national security.

“Where there are disputes, I point to the Winnipeg labs example specifically … we responded by creating a different model that allowed expanded access and a greater adjudication of those points independently,” Holland said.

The government’s refusal to release documents in that case has been contentious. Little is publicly known about why Xiangguo Qiu and her husband, Keding Cheng, were escorted out of Winnipeg’s National Microbiology Laboratory in July 2019 and subsequently fired in January 2021.

“To be clear, what Mr. Holland is suggesting when he refers to the ‘Winnipeg Lab situation’ is to ignore two orders from a committee, and two orders from the House of Commons for the production of the Winnipeg lab documents, all with reasonable safeguards to protect our national security,” Lloyd said.

Public Safety Minister Marco Mendicino also appeared as a witness at Tuesday’s committee meeting, where he said the government received advice to invoke the Emergencies Act, but did not answer questions about exactly who gave that advice.

Mendicino said the Emergencies Act helped “smooth over differences in jurisdiction” among police forces, and that he hoped the committee could provide advice about how to deal with that in the future.

Many have raised questions about the lack of enforcement action by police during nearly three weeks of noisy blockades in downtown Ottawa, where officials described a state of “lawlessness.”

While many people involved in the so-called “Freedom Convoy” said they were there to demand an end to COVID-19 restrictions, some, including many of the most vocal organizers, also wanted the Liberal government overthrown. Downtown residents reported vandalism and harassment.

The debate comes as another protest, this one on motorcycles, is due to arrive in Ottawa this weekend.

Ottawa police say they have already called in reinforcements from other police services.

The City of Ottawa said in a statement that all bylaws will be enforced during the “Rolling Thunder” rally, as will a vehicle exclusion zone in the downtown area. Streets will be open but vehicles that are part of the rally will not be allowed.