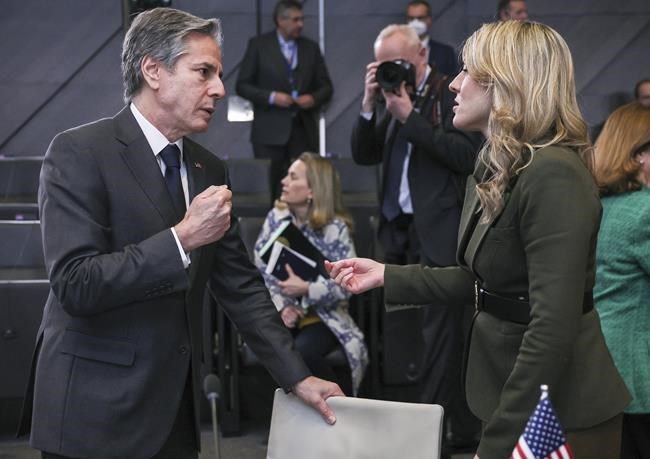 OTTAWA — Foreign Affairs Minister Mélanie Joly says she supports the "intent" of a bill from an independent senator to confiscate seized Russian assets even though the government's version of such a law differs in one key area.

Joly essentially endorsed the work of Sen. Ratna Omidvar, who has a bill with that goal that is currently at third reading in the Senate, during testimony at the Senate foreign affairs committee meeting on Thursday.

Omidvar asked Joly why being forcibly displaced is not a criterion in the government bill that would allow for asset seizure, as it is in her proposed legislation. "It's a significant difference … in language," she told the minister.

The senator said since millions of Ukrainians have had to flee their homes since the Feb. 24 invasion, that should be a feature of any new law that gives the government the power to seize and repurpose the sanctioned assets of Russian oligarchs supportive of President Vladimir Putin.

Joly told Omidvar that the government wanted to build on her work in the Senate and did not want to craft a law that placed a higher legal burden on government officials when they try to impose sanctions.

"That's why we thought that being just a bit broader could be much more helpful to meet the intent of the bill, and certainly your intent, senator," Joly said.

Omidvar thanked Joly for the response and for the government picking up the ball on her work in the Senate. Such a law would break new ground on the international legal landscape by moving beyond the simple freezing of bank accounts, assets and other property that the current sanctions regime allows.

Joly said earlier this week that because many Russians have assets in Europe and the United States, Canada wants to persuade other allies in the G7 to consider similar legislation.

On Thursday, it appeared Canada may have ticked one G7 member off its list — the United States — as President Joe Biden asked Congress for new power to seize and repurpose Russian assets that have been frozen by sanctions.

"Congratulations, you've stepped forward on the global stage as the leader in this," Omidvar told Joly. "And already President Biden has signalled his intent to follow suit. And I wish you luck with persuading your other G7 partners to do so too."

The government bill would allow it to seize the assets and consult a neutral court before they could be distributed to Ukraine war victims to rebuild their country, which has seen large swaths gutted since the Russian invasion began more than two months ago.

The proposed laws would allow for the seizure of assets of rich Russian oligarchs — from lucrative investments, to real estate, to super yachts — who have been loyal to Putin. No one knows for sure how much money might be up for grabs in Canada but many point to Roman Abramovich, a well-known oligarch who is a major shareholder in Evraz, a British multinational manufacturing company that operates a steel mill in Regina.

The Ukrainian Embassy in Ottawa and the Canadian-based World Refugee and Migration Council have applauded Omidvar's work to get an asset-seizure bill on the federal agenda. The embassy has urged the House of Commons to pass it into law before their current session ends in June.

This report by The Canadian Press was first published April 28, 2022.