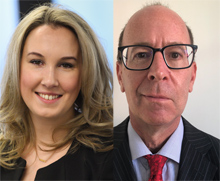 It’s finally springtime and you’re starting to do some travelling again this year. You’re on a weekend away to a lakeside town and walk into a local store. You spend a few minutes browsing the shelves and finally land on a cute trinket you can bring back home to remember your trip. You go up to the cashier, tap your credit card to pay, and then carry on with your weekend away.

If we were to ask you if you just participated in an international e-commerce transaction, most people would probably say “no” — and that would be a reasonable guess. An in-person trip to a physical location is hardly internet shopping, right? Canada’s digital privacy laws wouldn’t come into play here, right?

Except it was, and they probably do.

In this example, tapping your credit card and the subsequent digital processing of the transaction is all completed electronically over the internet. It’s possible, depending on the merchant, that some of the processing even happened internationally. Maybe you even opted to receive your receipt via email. The reality of “shopping local” in 2022 is often quite different from what we might first consider.

This new reality however creates a world of opportunity for Canadian businesses. For instance, our local lakeside store may also have an online shop, connected to their physical location, with similar transactions taking place every day, hopefully selling to happy customers around the world. And our governments at multiple levels have been spending on programs to help encourage Canadian businesses to get online to reach more customers, both within Canada and around the world. This support has been most welcome.

But privacy law, including those that regulate digital privacy and digital trade, are increasingly coming into play, even for supposedly “simple” things like buying a souvenir. These privacy laws are also significantly outdated and are now to the point of holding Canadian innovation and entrepreneurship back. Imagine what’s facing some of Canada’s other businesses that complete vastly more complicated transactions – from financial services like foreign investment management or tax preparation, to massive online retailers, to social networks, payment processing systems, and so on.

Canada’s current privacy law, which governs how Canadians’ personal information must be handled and protected by businesses your share it with, was brought into force about 20 years ago. While there have been some tweaks to it since then, it should go without saying that the digital world we live in today is vastly different from when Y2K was the biggest concern going. The federal law simply hasn’t kept up with the pace of change and Canadian businesses are now finding themselves at a disadvantage. It’s also important to ensure that Canada doesn’t end up with a proliferation of new privacy laws being enacted in each province individually.

(For comparison, in Europe, the next-generation privacy law (GDPR) has already been in effect for four years, across the continent.)

The fact that Canada’s privacy laws need updating is, it may surprise you to read here, not even generally a debated point. The Privacy Commissioner has been advocating for years on this topic, and indeed even has a section of the Commission’s website dedicated to the topic. The federal government also presumably agrees, given that it introduced Bill C-11 prior to last October’s election – which was the act that would overhaul Canada’s privacy law. Unfortunately the election call killed that bill in its tracks.

For our part, the Canadian Chamber of Commerce has on several occasions encouraged the government to reintroduce Bill C-11 in the new Parliament. Considering the widespread agreement from government, business, and privacy experts on the need to move forward on this file, there is no reason for delay. We continue to advocate that new privacy legislation needs to be introduced in Parliament, fine-tuned across partisan lines, and passed.

In a digital world, Canadians are connected like never before. Our educated workforce and advanced digital infrastructure give Canada a strong starting point to be a leader in the global digital future, but our international competitors are on the move. As virtual activities continue to increase, businesses and their customers must be confident that their data is protected. We also must help companies innovate to meet the digital needs of the world.

Simply put, Canada needs 21st century privacy legislation to help get the job done. Let’s see it reintroduced in Parliament before the House rises for the summer.