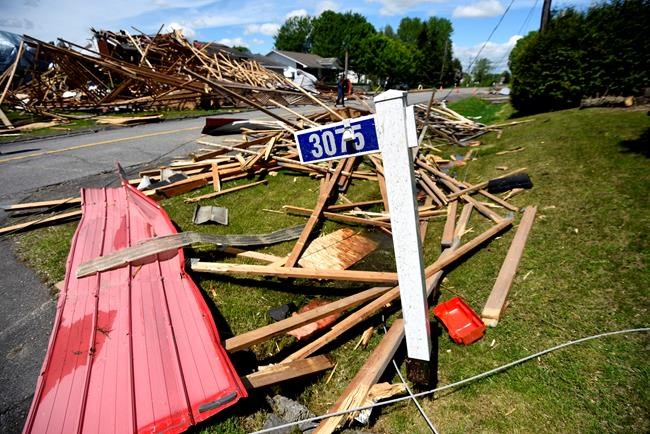 An arborist who specializes in urban forestry says the massive loss of trees in Ontario and Quebec over the weekend due to a severe storm will keep happening if land-use planning doesn't change.

Dr. Danijela Puric-Mladenovic, an assistant professor at the University of Toronto, said she wasn't surprised when thousands of trees were uprooted and destroyed by the deadly storm that swept through the province on Saturday because trees in urban and suburban settings are planted in soil that is very shallow.

"There is no deep root system developed," said Puric-Mladenovic, who saw dozens of trees felled in her Whitby, Ont., subdivision. "Because we plant trees that are coming from tree nurseries, whose root ball has already been chopped a million times.

"Then you plant them in compressed soil, literally like a bedrock, and they try to develop surface roots for food, but there is no stability."

Puric-Mladenovic said the effect is like a sailboat catching a gust of wind without a dagger board sticking deep below the water to balance the craft.

High winds took out trees and hydro poles alike on Saturday, leading to widespread power outages. Hydro providers warned customers on Tuesday they could be waiting for days for service to be fully restored.

Hydro Ottawa reported that about 74,000 customers were still without power midday Tuesday, while provincial provider Hydro One had more than 148,000 customers still affected by outages.

The Ontario communities of Uxbridge, northeast of Toronto, as well as Clarence-Rockland and the Township of Greater Madawaska, east and west of Ottawa respectively, remain under a state of emergency as a result of the damage, with some buildings reduced to rubble and streets blocked by uprooted trees, downed power lines and broken telephone poles.

The death toll in Ontario climbed to at least 10 on Monday, with Peterborough police confirming that a 61-year-old Lakefield man died during the storm after being struck by a falling tree.

"What a tragedy, what happened over the weekend, with this storm, so widespread," Progressive Conservative Leader Doug Ford, who is running for re-election as Ontario's premier, said Tuesday morning at a campaign stop. "I just want to give my prayers and thoughts to the families that lost loved ones.

"I also want to thank the utility workers that work their backs off, cancelled their long weekend. They're all champions and I'm very, very grateful for all their hard work."

Hydro Ottawa's chief executive said Monday that their distribution system had been "crushed," noting the 187 poles downed during the storm not only exceeds the number the city traditionally puts down in a year but also tops the number felled during the 1998 ice storm and 2018 tornado.

Puric-Mladenovic said subdivisions built after the 1960s typically add trees as an afterthought into topsoil meant to support grass and gardens.

"We can go and replant and they will grow for the next 30-35 years or so," she said. "And then we'll have another storm and we'll be in the same situation."

The lack of power prompted the Ottawa-Carleton District School Board to close all schools and childcare centres on Tuesday due to ongoing safety concerns posed by the storm, saying in a notice to parents that about half of their schools were without power.

Across the provincial boundary, Hydro-Quebec reported about 1,600 outages affecting more than 120,000 customers — mainly in the Laurentians, where 69,495 customers were still without power, along with the Outaouais and Lanaudière regions, as of midday Tuesday.