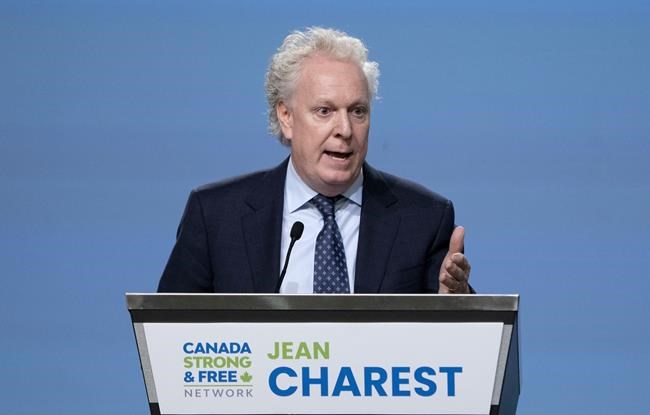 A former Conservative leadership candidate says expectations will be high for ex-Quebec premier Jean Charest when he takes the stage in his home province for the party’s French-language debate this week.

Rudy Husny, who now works as a consultant and political analyst, says Charest, who is fully bilingual, must win the province if he hopes to win the contest.

“He’s playing at home in a way,” he said. “In his game plan he needs to win, and show very strong results in Quebec to have a path to victory.”

The party’s second official debate of the race takes place Wednesday near Montreal, as candidates only have about one week left to sell membership cards to supporters to be able to cast a ballot.

Charest entered the race to replace former Conservative leader Erin O’Toole after spending more than 20 years out of federal politics, including the past decade in the private sector. His campaign is hoping the former federal Progressive Conservative leader will draw many new faces into the party, including in Quebec.

“He knows the province, obviously, more than anyone else,” said Gerard Deltell, a Conservative MP from the party’s Quebec caucus. Most of them are supporting Charest.

“This is the road to win and we are winning that road.”

Deltell dismissed the notion of expectations being any higher for Charest than the other five candidates, saying the debate will be an important event for them all.

Husny sees the debate largely being dominated by Charest and Pierre Poilievre, the party’s longtime Ottawa-area MP who speaks French fluently — and is also competing for Quebec members — because of their language skills.

Poilievre spent the weekend campaigning in the province.

On Tuesday, he wrote to federal Finance Minister Chrystia Freeland, requesting the Liberal government eliminate the gas tax and GST on gas for the summer because of the high prices consumers are paying.

Patrick Brown, the mayor of Brampton, Ont., is also expected to be able to keep up during the debate on Wednesday, which will be held in Laval, Que., just north of Montreal. The former MP, has focused a lot of his campaign on selling party memberships to immigrant and racialized Canadians, including those who live in Montreal.

One of his biggest promises has been to fight a controversial secularism law in Quebec, known by its legislative title of Bill 21. It prohibits some public servants deemed to be in positions of authority from wearing religious symbols on the job.

Before entering the race, Brown spearheaded campaign among cities in Canada to pledge financial support behind a court challenge of the law. He says it violates religious freedoms.

Poilievre has previously said that he believes the law is wrong and hopes Quebec repeals it. Charest has also voiced opposition to Bill 21.

Deltell says while some may favour Brown’s approach of more forcefully fighting the law in court, many do not because it would step on Quebec’s jurisdiction.

“I totally disagree with the fact that the mayor of a city in another province decided to put money against a provincial decision,” he said.

Husny anticipates Bill 21, as well as Quebec’s proposed language law known as Bill 96, being among the issues raised during the debate.

He said he also expects to see candidates discuss the Roxham Road border crossing the province shares with the United States, which many refugee claimants have used to enter Canada. Quebec Premier François Legault recently asked Ottawa to close it.