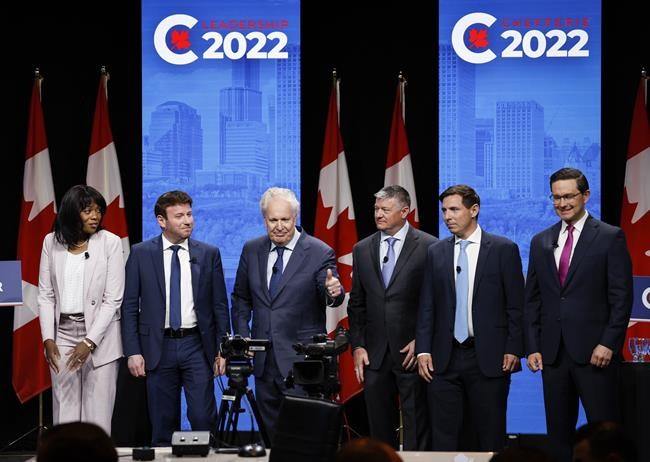 OTTAWA — Candidates running for leadership of the federal Conservative party will meet north of Montreal Wednesday to face off in the second official debate of the race, this time in French. Here are five things to watch for when candidates take the stage:

Charest versus Poilievre: The debate is largely being thought of as a showdown between former Quebec premier Jean Charest and longtime Conservative MP Pierre Poilievre, both of whom speak French and will be able to converse freely. Patrick Brown, although not bilingual, is expected to be able to keep up. Charest and Poilievre are both competing to win the province, which has 78 ridings, and was won by the last two candidates who went on to win the party's leadership races in 2017 and 2020. As the province's former premier, Charest may be pressed on his record, which runs deeper than anyone else’s in Quebec.

Lewis's French: Many party members' eyes will be on Leslyn Lewis to see if her French has improved at all since the French-language debate of the 2020 leadership contest, in which she placed third overall. Lewis mostly stuck to reading from a prepared script during that French debate, resulting in a stilted performance. The ability of candidates Scott Aitchison and Roman Baber to debate in French will also be put to the test Wednesday.

Bill 21 and Bill 96: A controversial Quebec secularism law that prohibits some public servants from wearing religious symbols on the job and a new reform of the province's language law are among the issues expected to be raised. On the former, Brown has campaigned on being the only candidate willing to fight in court against the law known as Bill 21, which he says violates the religious freedoms of racial minorities. Premier François Legault's Bill 96, which passed Tuesday and seeks to better protect French in Quebec, has been panned by critics who say it could cost some English speakers their jobs and restrict anglophones from being able to access services in their language.

Debate format: Many Conservatives disliked the format of the party's first English-language debate staged several weeks ago in Edmonton and are hoping to see changes for the next one. During the first debate, candidates were at one point asked a series of personal questions, including what book they were reading and the last television show they watched. As well, critics of the format said candidates were not provided with enough time to actually engage with another and had to adhere to overly strict rules, which at times included prop paddles and a sad trombone sound effect.

Supply management: Maxime Bernier's promise in the 2017 leadership race to scrap the system of setting quotas for dairy products and imposing heavy tariffs on imports has re-emerged during this contest thanks to a promise made by Aitchison. The rural Ontario MP says he wants to axe the system in an effort to bring prices down for Canadians. Both Poilievre and Charest have pledged to keep supply management in place. Politically, they have some history for wanting to do so. Bernier's pledge in 2017 saw many Quebec dairy farmers take out party memberships and cast a ballot in favour of his rival and eventual race winner Andrew Scheer, who promised to uphold the system.