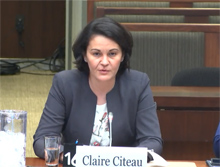 Canada needs an office focused on expanding trade with that region.

Ottawa—Canada needs to remain focused on expanding trade in the Indo-Pacific region while ensuring the terms of trade agreements are actually implemented, say agrifood export groups.

They told the Commons international trade committee the region represents a strong market for Canadian farm and food products and the federal government needs to build up its capacity to deal with the region.

Claire Citeau, Executive Director of the Canadian Agri-Food Trade Alliance, said, “Opening markets and upholding the rules-based trading system are perhaps the most important things the government can do to protect Canada’s agri-food sector and support its critical role in the economy.

“As a market of 643 million people with a growing middle class, this region provides the opportunity to boost our competitiveness and a framework to diversify in countries such as Indonesia, Thailand and the Philippines, in particular,” she said. Canadian agrifood has benefited from the Pacific trade deal and needs to seek other partners including India.

Jack Chaffe, President of Beef Farmers of Ontario and co-chair of the foreign trade committee of the Canadian Cattlemen’s Association, said beef producers want an end to various restrictions of beef exports imposed by other countries. The federal government needs to be proactive “in addressing and preventing market access issues. This could be accomplished by creating a new Indo-Pacific diversification office.

“Canada should seek to ensure that trade negotiations recognize the importance of effective implementation. This is so negotiated outcomes can translate into real growth opportunities for businesses. There are many examples of trading partners not abiding by commitments.”

He also called for an improved advocacy capacity and industry-government collaboration so that Canadian officials are equipped with the tools and information needed to promote the science and sustainability behind Canada’s world-class agrifood sector.

“Overall, we all need to do a better job communicating with one another as industry and government, but also with our trading partners to enhance dialogues, encourage greater transparency, and foster more accountability, so we can tackle issues before they become problems. This is particularly true after two years of virtual discussions, an erosion of trust, a lack of respect of trade rules around the world and massive ongoing shifts in the global trading environment.”

Dave Carey, Vice-President of the Canadian Canola Growers Association), said expanding Canada’s trade and economic relationship in Southeast Asia through commercially meaningful trade deals should be a cornerstone of Canada’s Indo-Pacific strategy. “While not currently a large market, market opportunities for Canadian canola oil and meal are expected to increase.”

Non-tariff barriers are increasing in number and complexity in the region, which curtails “our growth potential and serve as a barrier to building markets in the region,” he said. An Indo-Pacific diversification office would help Canada capitalize on growing opportunities in the region. Complementary to the trade commissioner service activities, such an office would focus on strengthening market access, responding to emerging policy and regulatory issues and enhancing collaboration between government and industry to prevent and overcome barriers in a timely manner.

“Many countries in the region lack well-developed science-based regulations and transparent commercial environments,” he said. “A specialized multidisciplinary office could leverage its boots on the ground experience and regional connections to help exporters overcome market risk and proactively find solutions to the complex market access challenges facing agriculture.”