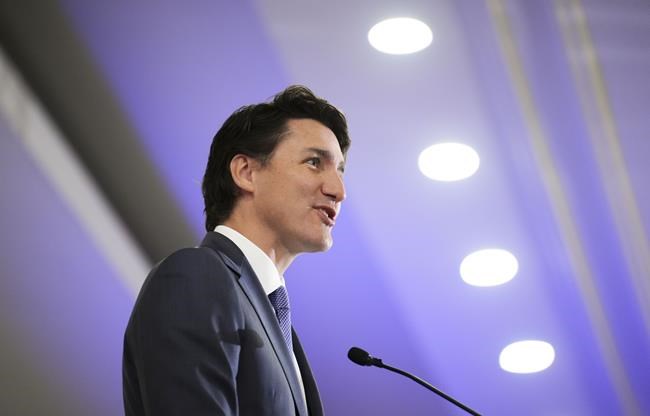 OTTAWA — Prime Minister Justin Trudeau offered a prayer of peace and spoke of moving together on the difficult path of reconciliation at Tuesday's National Prayer Breakfast.

Trudeau delivered remarks to MPs and guests gathered together in downtown Ottawa for the annual event, which is non-partisan but attended by many Conservative MPs.

It was the first time it has been held in person since the COVID-19 pandemic began.

Trudeau, who was seated next to Opposition Conservative Leader Candice Bergen for the event, says he knows public health measures introduced to stem the spread of the virus have been hard on faith communities, which have found new ways to worship.

"But I know that the choir never sounds quite as good on Zoom," he said, while some in the room laughed.

"It's good to be back together, all together."

The prime minister told the crowd that prayer offers a chance for reflection, including the Catholic prayers he grew up with.

Trudeau then offered up a short prayer in which he asked for collective guidance with moving forward "on the sometimes difficult but necessary paths of reconciliation."

"Our country has been a welcoming haven since its origins. This vast land, with its abundance of beauty and natural riches, has been the home to peoples for millennia," he said.

"We pray, Lord, for peace, and ask you to open our minds and our hearts because, as Christ said, 'I have come so that they may have life and have it to the full.'"

This report by The Canadian Press was first published May 31, 2022.