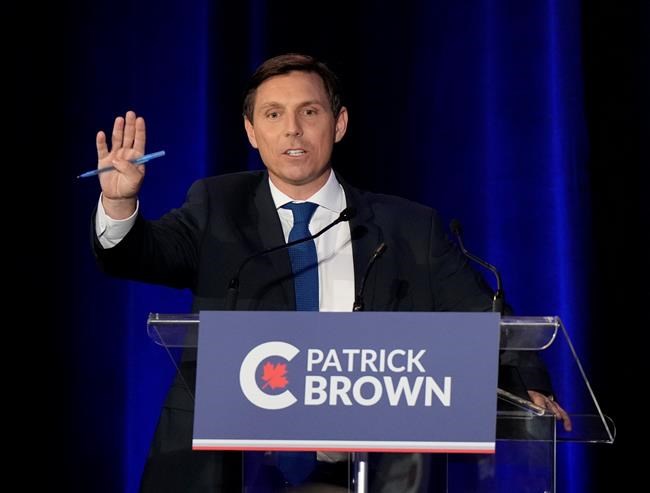 OTTAWA — Conservative leadership candidate Patrick Brown says he believes Canada can advance its trade relationship with China while at the same time take a stand against its human rights abuses.

"I'm a firm believer that you can do both," Brown said in a recent interview.

The Tories' position toward the Communist regime was put into the spotlight following last year's federal election where, to the surprise of many in the party, it suffered losses in long-held seats around Vancouver and Toronto, which were home to many Chinese Canadians.

Ex-MP Kenny Chiu lost his Richmond-area seat and has said he and the party were subject to falsehoods being spread online about a private member's bill he had advanced. Conservative foreign affairs critic Michael Chong has also argued the party lost seats because of domestic and foreign actors spreading disinformation.

Two McGill University researchers wrote in Policy Options earlier this year that Chiu’s bill, which aimed to set up a public registry of individuals acting on behalf of foreign countries, became the target of a misinformation campaign on Chinese-language social media.

Benjamin Fung and Sze-Fung Lee warned that such tactics could be deployed against any group and carry “high potential” for foreign interference in Canada’s electoral process.

The debate still lingers about the impacts of the misinformation on the party's fate in the 2021 election. Former leader Erin O’Toole also ran on a vocal promise to adopt a tougher stance than the Liberal government toward Beijing — something Brown said wasn't articulated clearly.

"Because of the long-standing relationships I have in the community … I have posed that question. I said, 'What happened?'” Brown said.

“The impression in the community was that the Conservative party was against the Chinese Canadian community. So I think there needs to be a clear distinction.”

Brown is relying on the ties he has to the country's Chinese communities, as well as other immigrant groups and racialized Canadians, to win the leadership contest.

His campaign is focused on selling thousands of party memberships to supporters within the Chinese, Muslim, Tamil, Sikh, Filipino and Nepalese communities, with the deadline arriving Friday for memberships to be sold.

"My only plan is to win this leadership," said Brown, who is campaigning while still remaining in the role as mayor of Brampton, Ont., which is scheduled to have its own municipal election this fall.

"Based on the support we're getting around the country and the new memberships, I feel very confident we're going to be able to be successful."

Included in Brown's pitches to different cultural communities are promises to fix the immigration system and stand up for religious freedom and against all forms of discrimination like Islamophobia and anti-Asian racism.

Brown also announced last month he had secured the endorsement of the Chinese Canadian Conservative Association. After last year's election loss, the National Post reported that the association called for O'Toole to resign in part over his position toward China.

Canada's relationship to China has cooled considerably since residents went to the polls.

Shortly after the Liberals were re-elected to a minority last September, the regime released Michael Kovrig and Michael Spavor, two Canadians that Prime Minister Justin Trudeau and other world leaders said had been arbitrarily detained after the RCMP arrested Huawei executive Meng Wanzhou on a U.S. extradition warrant.

So far, one of the main ways China has been discussed by the six candidates vying for O'Toole's former job has been around Huawei Technologies, which they say Ottawa took too long to ban from its 5G telecom networks.

As well, Pierre Poilievre, the longtime MP from around Ottawa, has routinely attacked former Quebec premier Jean Charest for the work he did with Huawei after leaving politics. Scott Aitchison, an MP first elected in 2019, has also pledged that under his leadership, Canada would recognize Taiwan as its own sovereign, democratic country.

"I will defend Canadian interests and values when dealing with all countries, including China," Poilievre said in a statement.

Brown has focused all of his attacks so far in the race against Poilievre, alongside whom he used to serve as an MP before entering Ontario politics.

Compared to other candidates, Poilievre also boasts the largest number of endorsements from MPs.

A lingering question for many watching the race is how caucus will react to and rally behind whoever is named party leader when ballots are counted Sept. 10, especially since the contest has been full of personal attacks between campaigns.

Although Poilievre has more endorsements, Brown said he has long-standing relationships with MPs from his time in Ottawa and has been reaching out to some backing other campaigns about the importance of all coming together when the race is over.

As for the fate faced by O'Toole, who was voted out by a majority of his MPs, Brown said a review was to be expected after he lost the election. O’Toole had, among other things, attempted to change and modernize the party.

Brown said the challenge for O’Toole was that he took one position during the leadership race and then another after the contest.

This report by The Canadian Press was first published June 1, 2022.