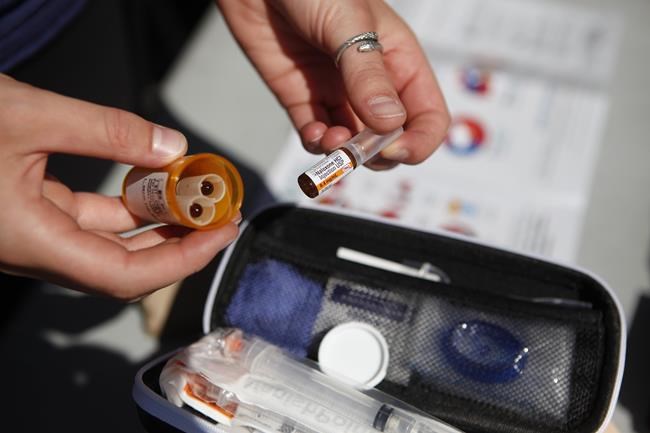 MONTREAL — Hundreds of thousands of high school students in Canada will be given training on how to respond to someone overdosing on opioids, including on how to administer naloxone — a drug used to reverse the effects of overdoses.

The Advanced Coronary Treatment Foundation is announcing Tuesday that its new training program will be added to the CPR and automated external defibrillator training it offers for free in high schools across the country.

Each year, in addition to learning how to administer naloxone, about 350,000 students will learn about opioids and how to identify when to call 911, when to perform cardiopulmonary resuscitation and when to give naloxone. The training will first be deployed in Quebec, Alberta, Ontario, and British Columbia before expanding to other provinces.

“The (opioid) crisis is very real,” Jocelyn Barriault, the medical director of the foundation, said in a recent interview.

The Public Health Agency of Canada reported more than 5,386 deaths related to opioids between January and September 2021. The majority of the deaths — 94 per cent — were accidental.

"Cardiac arrests … it doesn't happen to young people that much," Barriault said. "But with opioids, there's a lot of chance that it's a peer … that it happens at school or at a party."

If a young person is confronted with someone suffering from heart failure, Barriault said, he or she will be trained on how to administer naloxone nasally. "And we hope it's going to work; but if we don't do anything, it's clear it won't."

Barriault said the training, which was developed after a successful pilot project in Ottawa involving 186 students and 15 teachers in 2019, will be an opportunity to teach young people how to react in emergency situations and on the risks of opioids.

Carole Nadeau, who is leading the training program in Quebec, said between 1,000 to 1,500 Quebec teachers will be trained on how to teach the program to about 70,000 students each year in the province.

"We have done training at 141 schools, which represents 405 teachers that are ready to teach all of their students about opioids," Nadeau said. "It's a lot of people."

This report by The Canadian Press was first published on June 14, 2022.

Note to readers: This is a corrected story. A previous version said students were being trained to inject naloxone but the drug will be administered nasally.