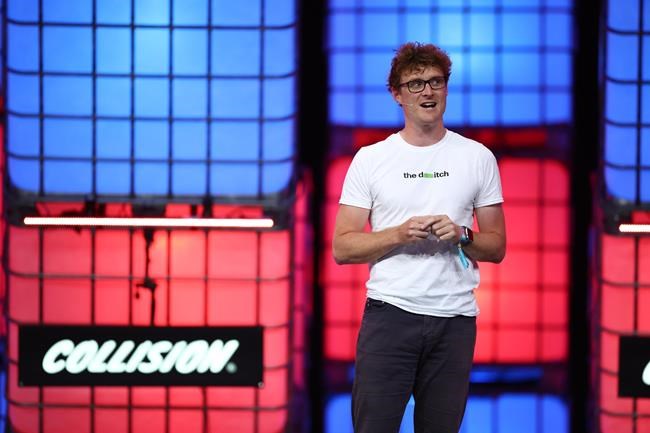 TORONTO — Collision tech conference attendees filtering through the doors of a Toronto convention centre on Tuesday faced a scene that looked a lot like the pre-pandemic event, but an uneasy atmosphere hung over the crowd.

For many, it was their first large-scale conference since COVID-19 cancelled gatherings more than two years ago and it came as the global tech community is facing a downturn.

The measures are meant to insulate businesses from the fading exuberance around tech stocks, including several which have plummeted significantly from their COVID-19 highs.

"The global venture capital market is really at a pivotal moment after coming off of 2021, where there was record deal value, record exit value generated and record fundraising," said Kyle Stanford, a senior venture capital analyst at data company PitchBook.

"We are really sitting at a market, where we are looking at increasing inflation, high interest rates, geopolitical tensions, which are going to put a lot of pressure on the market."

Thoughts like Stanford’sdominated chatter around Collision’s booths and stages, where more than 600 speakers, including former Google CEO Eric Schmidt and basketball star Carmelo Anthony, will appear before the four-day conference once dubbed the “Olympics of tech” wraps on Thursday.

The travelling conference made its Toronto debut in 2019 and was expected to remain in the city for two more years, but when the health crisis materialized, Collision moved online. It has since committed to remaining in Toronto until 2023.

While local mask and vaccine passport mandates were dropped in time for the sold-out event, Collision CEO Paddy Cosgrave anticipated many would forgo handshakes and take advantage of an expanded event space, including a new outdoor area with meeting spots.

“There's so many tables being put down, we had trouble finding enough tables,” he said, in an interview Saturday.

The affable Irishman’s seen many of Collision’s 35,000 attendees skip the conference’s talks to spend more time networking, but expected the opposite this year because people are “hungry” to make sense of “frightening” economic headwinds.

Venture capitalists, who raised massive amounts of money and seemed like “the masters of the universe” with 20 or 30 times the returns, are now being forced to mark down their funds, he said.

The cryptocurrency industry is also under pressure. Earlier this year, the price of Bitcoin sank to its lowest level since 2020 and stablecoin TerraUSD was embroiled in lawsuits, erasing an estimated $40 billion in investor funds.

At least eight cryptocurrency companies, including embattled lending platform Celsius, dropped out of Collision in the last three days, Cosgrave said on Saturday.

“Part of the reason is we said, ‘look there are major, serious questions. We want to put them to you on stage,’” said Cosgrave.

“None of them have said, ‘Oh, no, I don't want to be asked the serious questions,’ but … things have suddenly come up … Crypto’s leading lights are unwilling to answer tough questions. They’re just running for the hills.”

“Lots of journalists say, ‘Oh, what do you think that means?’ Look, just draw your own conclusions,” said Cosgrave. “Personally, I think it's understandably (about) who's going to give them an easy time right now.”

Amid a broad market selloff that has particularly weighed on the tech sector, the price of Shopify’s stock has sunk more than 70 per cent since its late 2021 peak of $2,228.73.

Despite the absences and downturn chatter, many were still optimistic about both the tech and crypto industries at-large, and were letting that feeling guide their investments.

At a booth highlighting the tech sector in York Region, an area just north of Toronto, about $250 million in business investment announcements are expected to be made during Collision, leading to an estimated 800 local tech jobs.

"We are living in different times right now, but ... if angels are hearing from an amazing entrepreneur or a team about an amazing innovation, that is globally scalable, that can have huge impact, then we are all ears no matter what is happening," said Katie Salem, executive director at York Angel Investors.

Christophe Bourque of White Star Capital, which has invested in Borrowell, Dialogue and Dollar Shave Club, shared Salem's sentiments.Earlier in the day, he said he remains “a big believer” in the crypto industry’s long-term longevity.

This report by The Canadian Press was first published June 21, 2022.