It is a very big anniversary day in the proud history of Canadian-American relations. On this date in 1959, U.S. President Dwight Eisenhower, Prime Minister John Diefenbaker and Her Majesty the Queen were all on hand for the official opening of the St. Lawrence Seaway, perhaps the greatest infrastructure project ever undertaken by the two governments working in unison.

You will find below the speech delivered that historic day by Her Majesty the Queen.

Mr. President: I am delighted that this occasion which marks the inauguration of a great joint enterprise between our two countries should afford me the first opportunity of welcoming you (President Dwight Eisenhower) and Mrs. Eisenhower to Canada. It is with the warmest feelings of friendship that I do so on behalf of the Canadian people, myself and my husband.

The President of the United States will always be welcome here, but today there is an added pleasure and a special warmth in our greeting. You will always be remembered as one of the great military leaders who brought the free world through the most severe crisis of modern times. The soldiers, sailors and airmen of the Commonwealth, including many thousands of Canadians, were proud to serve under your leadership until the ultimate victory was won. We welcome you here as a President of a great and friendly neighboring State; but we have a special welcome for you as General Eisenhower.

Today Canada and the United States are celebrating a victory of another kind. This distinguished company has come together from the two great countries that border this waterway to mark the completion of a combined operation that ranks as one of the outstanding engineering accomplishments of modern times. We can say in truth that this occasion deserves a place in history. This is nothing new to the St. Lawrence River which from the times of Cartier and La Salle, of Wolfe and Montcalm, has been the scene of so much of North America’s history.

Since the time of François Dollier de Casson men have dreamed and worked for two and a half centuries to make this river navigable, and now at last it is a reality. This waterway will carry ocean shipping from tidewater to the very heart of the continent, a distance of more than two thousand miles. It will affect the lives of many generations of our peoples; and it is bound to exercise a profound influence on the maritime trading nations of the world. It is right that we should acknowledge the foresight of those who first conceived this great plan.

But we should also acknowledge the courage and persistence of those men in public life, in both countries, who brought about the political agreement essential to putting the project in hand. When their work was done, it rested on the engineers to design these vast and complex works, which finally began to take shape in the hands of the men who drove the trucks, poured the concrete and performed all the other tasks to complete the Seaway.

Just ninety-nine years ago my great-grandfather, King Edward VII, then Prince of Wales, came to open the Victoria Bridge. In those days that bridge was regarded as a tremendous feat of engineering. It was obviously a good bridge because nearly one hundred years later it is still in use. In fact, I shall sail under it shortly. It was also the final link in a new railway line more than two thousand miles long.

So, in 1860 people thought of the Victoria Bridge as a striking symbol of Canadian progress and achievement. Today, within sight of the spot where the Prince of Wales stood in 1860, we are opening a project with exactly the same significance for our own age. In the context of a much larger and stronger Canada this enterprise reflects the same confidence and determination. The same creative vision has conceived and built a highway which will open the middle of this continent to the commerce of the world.

This vast undertaking has been a cooperative effort of Canada and the United States, of the Power Authority of the State of New York and the Hydro-Electric Power Commission of the Province of Ontario. The two nations built it together and the two nations will share its benefits. Power will flow from the new turbines to drive factories on both sides of the river.

Ocean-going ships will go up and down this waterway, taking goods to and from American and Canadian ports, and exchanging the products of North America for those from the rest of the world.

More than all this, it is a magnificent monument to the enduring friendship of our two nations and to their partnership in the development of North America. That partnership is most agreeably symbolized, Mr. President, in the fact that you and I have joined together to perform this ceremony today. 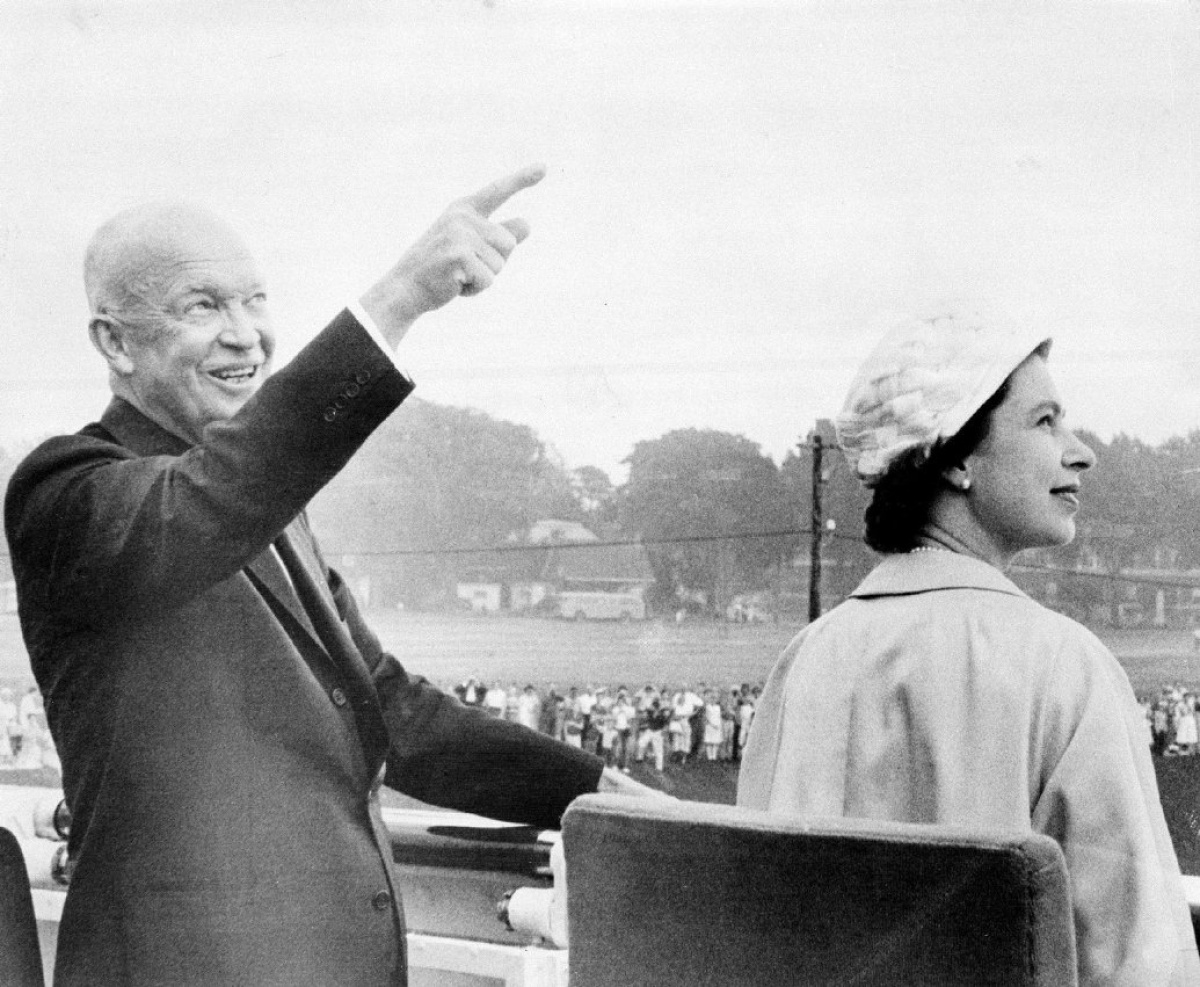 President Dwight Eisenhower and Queen Elizabeth II at the opening of the St. Lawrence Seaway