As readers of Art’s History know, I am no fan of calling our national day “Canada Day.” Instead, I, like my late father before me, still say today is “Dominion Day.” But, in the interest of celebrating each July 1 the work of the Fathers of Confederation in establishing and then nurturing the new nation in 1867, I’ll accept an amalgamation of the two names. So Happy Dominion-Canada Day all. It is the 155th anniversary of Confederation’s going into effect.

In terms of political history, today also happens to be the 102ndanniversary of the great Sir Robert Borden, the PM who led our young country through the First World War, informing his caucus in Ottawa of his resignation plans. Prime Minister since 1911, his government and our country was consumed by the Great War that started in August 1914. While historians generally agree that Borden was somewhat of a hypochondriac, it is totally understandable that the 8th PM felt exhausted and listless after the war. 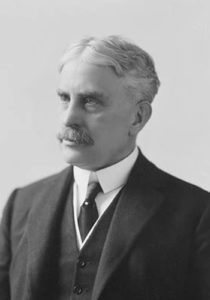 “I entered public life in 1896 and four years afterwards I was selected as leader of the Liberal-Conservative Party when it was at the nadir of its fortunes,” the tired leader and Prime Minister told his caucus. “For more than ten years I led that party in opposition, and for nearly nine years I have been Prime Minister. During more than four years of the latter period our country was involved in struggle, effort and sacrifice wholly unprecedented in our history. The strain imposed upon Ministers since August 1914, is not to be measured by years. It has left its effects upon every of the Administration and notably upon myself.”

“May I add that,” Borden concluded, “although the path of duty was not always to be discerned clearly, I have never consciously departed from able discharge. I have the permission of His Excellency the Governor-General to inform you of my retirement in the immediate future.”

A few days later, Sir Robert would be on hand as his successor, Arthur Meighen, was sworn-in as Canada’s 9th Prime Minister. Months later, in November 1920, Borden, in the privacy of his diary, had no regrets at stepping down.

“Democracy is always ungrateful, forgetful and neglected,” he wrote. “I am very happy to have given up my public duties and to have retired from public life.”