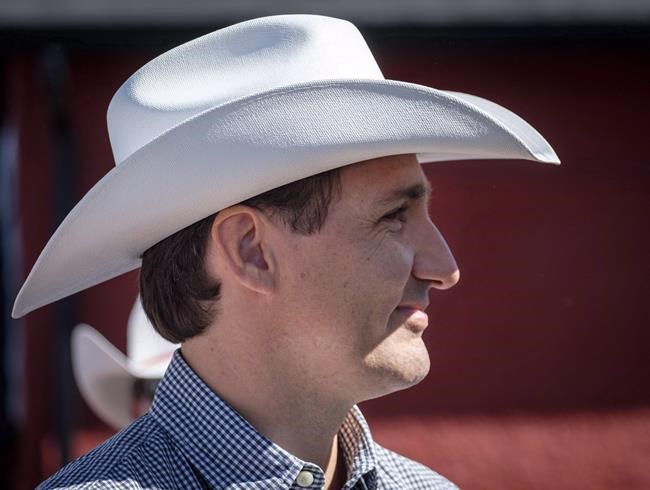 CALGARY — There's more to the Calgary Stampede than a rodeo, cowboy hats and horses — it's also a major opportunity for politicians.

Regardless of their political stripes, they ride into the city looking to lasso partisan support in the form of votes.

The 10-day festival celebrating the cowboy way of life has attracted all federal leaders, who often take on the persona of duelling gunslingers looking for votes in a game of political one-upmanship.

Liberal Prime Minister Justin Trudeau has been a regular visitor to the Stampede, as have the leaders of the federal Conservatives, NDP and Green Party.

The federal Conservative party leadership race was the focus Saturday night as four out of five of the candidates attended a local party barbecue.

Interim party leader Candice Bergen assured the crowd of 1,100 that unity doesn't mean uniformity and it's okay if party members disagree on a number of issues.

"It is okay to be a Conservative and have a different view from another Conservative on a particular issue. We are in the middle of a leadership race and I'm not naive nor am I blind," Bergen said.

"I know things are heating up and they have heated up during the leadership race and so they should. Leadership my friends is not for the faint of heart. I have no doubt that we will be united and strong after September 10 after our new leader is announced."

With the exception of Scott Aitchison, the other four candidates, Pierre Poilievre, Jean Charest, Leslyn Lewis and Roman Baber were given one last opportunity to try and win over supporters.

"I got my values here. Values of hard work, self-reliance, independence and freedom. I was raised on those values but lately we haven't seen a lot of freedom in this country. People feel like they're losing control of their lives," Polievre said to loud applause and a standing ovation from some in the tent.

"Why am I running for prime minister? To put you back in charge of your life by making Canada the freest nation on earth."

"In fact, Conservatives have to be the most generous political party in the world. There's an election campaign and we say to Mr. Trudeau here, you take it," Charest said.

"At the end of the day we need to win an election campaign and we can't run the risk of losing that campaign. The choice you are going to be facing...is who is it who will win a national Conservative government with a made in Canada agenda."

Charest was heckled through much of his speech by one individual who identified as a Poilievre supporter.

"Aren't you a Liberal?" he yelled out.

A woman, who identified as being from Toronto told him to "stop it"

"Go back to Toronto then. It's Alberta. It's Western Canada," the man replied.

Interest in politics and the Stampede has continued to grow over the years.

"It isn't just Conservatives that do this. I think somehow it evolved," said Lori Williams, a political science professor at Calgary's Mount Royal University.

"There was enough media attention and enough people coming from outside of Calgary that it became a magnet for leaders across the country to come and engage in sort of feel-good political connections that would be seen by people across the country."

She said there's some "star power" associated with the Stampede too.

"Seeing someone they have viewed online or on television and they want to sort of see and connect — and that's a great opportunity for politicians, because sometimes those connections can change hearts and minds."

The federal Conservatives are scheduled to elect a new leader in September.

Former Calgary Conservative MP Joan Crockatt said politicians get a chance to see a lot of people during the Stampede, which makes it very efficient.

"I think what people have kind of come to expect from the Stampede is that there's going to be some star quality, you get to wear your rhinestones and your cowboy hat and your cowboy boots," said Crockatt, who represented Calgary Centre from 2012 to 2015.

"That's a way more fun way to meet a politician than events or going door-knocking."

The Stampede runs through July 17.

This report by The Canadian Press was first published July 9, 2022.