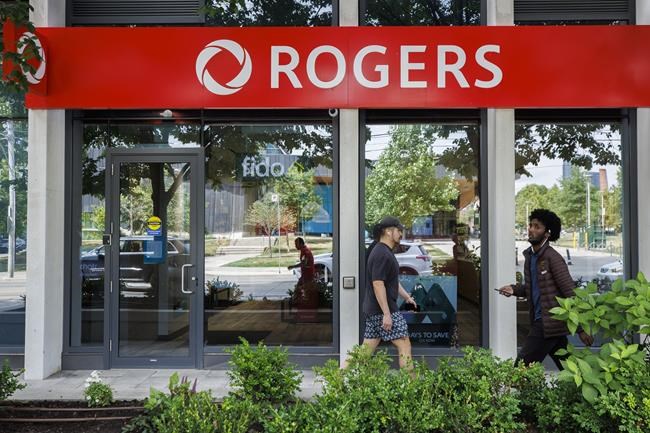 TORONTO — A Friday outage from Rogers Communications Inc. resulted in some small businesses losing thousands of dollars, which they fear the telecommunications giant won’t fully compensate them for.

They say the internet and mobile phone service outage that lasted most of Friday and for some, into the weekend, left them unable to serve customers as they usually would. In many cases, businesses couldn't even accept debit cards because payments processor Interac relies on Rogers.

"I've heard all sorts of stories of hundreds or thousands of dollars in business losses as a result," said Dan Kelly, president and chief executive of the Canadian Federation of Independent Businesses.

Rogers chief executive Tony Staffieri apologized Friday for the outage caused by a network system failure following a maintenance update. He promised customers would be credited for the downtime.

Asked for more specifics around the compensation, Rogers did not immediately respond to a request for comment, but its @RogersHelps Twitter account tweeted to some customers that the credit will be "equivalent to two days of service" and automatically applied to accounts.

Interac also did not respond to an email asking if it would provide compensation to customers.

Kelly feels business owners should be given a free month of Rogers service to make up for the outage that came as companies are still recovering from the COVID-19 pandemic.

"There are businesses in Canada that have been closed down for over 400 days all together in some parts of Canada over the last two years, and so every single day of sales is absolutely critical in this recovery period," he said.

"It was just brutal ... and far more than an inconvenience. This was cutting into very limited income at a very critical period."

Elektra Simms estimates her Morning Parade Coffee Bar in Toronto lost a few hundred dollars because many customers went in search of another place to work from because the café's Wi-Fi was impacted by the outage.

With debit services down too, Simms told many regulars who couldn't pay they could cover their purchase next time they visited.

Many have since returned but that doesn't recoup what she's lost from people who would have lingered at the café longer had there been internet.

"At a time like this, when small businesses have struggled so much ... it's just another thing that impacts your bottom line," she said.

"Businesses like ours don't have that wiggle room anymore."

"Some of our clients were basically unable to transact at all," he said.

"We had some in some locations where Rogers is the only internet available to them and there are no alternatives ... but as the outage dragged on, we did have some client locations that had to shut down."

Many of those locations are very busy and closing them resulted in thousands lost, he added.

He's heard Rogers will credit businesses for two days of lost service, which he estimates to be about $6 off the average bills.

Pearce doesn't think Rogers should have to cover thousands of dollars in lost revenue, but thinks $6 is not commensurate to the impact some businesses faced.

This report by The Canadian Press was first published July 11, 2022.