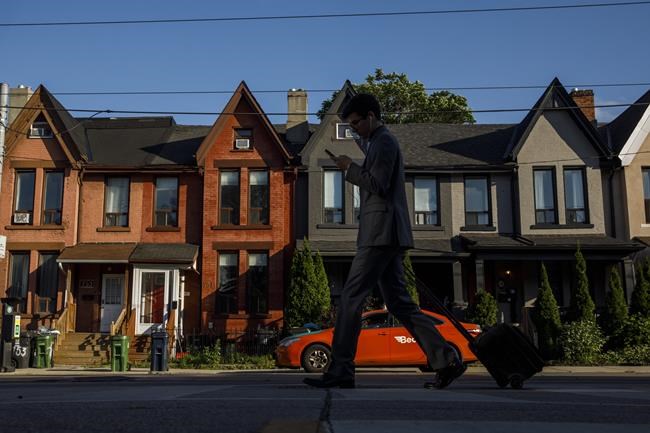 TORONTO — When Gina Athanasiou's father died in 2016, she realized her mother, who bounced between Canada and Greece for most of her life, didn't have a pension large enough to cover the soaring costs of a Toronto home.

The solution? Athanasiou, a real estate agent, invited her mother to move into the East York home she lived in with her husband and children.

"There is no way that my mother could have financially existed on her own in Toronto, if she didn't have us to live with," Athanasiou said.

While the figures show more people are living alone than ever before, the proportion of households where roommates live together or multiple generations of a family share a home is rapidly rising.

The number of homes being shared by multiple generations of a family, two or more families living together or one family living with people they may or may not be related to grew by 45 per cent over the last 20 years.

These households amounted to almost one million in 2021, making up seven per cent of Canada's homes.

Close to one in 10 children up to age 14 were living in the same household as at least one of their grandparents in 2021, up seven per cent from 2001.

"If we zero in and look at the provinces and territories, in Nunavut, among very young children aged less than five, close to one in three are living with one of their grandparents, and that's the highest within Canada," said Statistics Canada senior analyst Nora Galbraith.

"The lowest is in Quebec. It's five per cent, so that's reflecting different cultural preferences, as well as different housing and economic situations."

Economists and demographers have attributed such trends to wages not keeping up with the soaring costs of living, along with immigration and elevated home prices.

The average home sold for $711,316 in May, a drop from $687,595 during the same month the year before but still well above what people paid for a home years ago, said the Canadian Real Estate Association.

Rentals.ca data shows the average Canadian rent hit $1,885 per month in June, a 9.5 per cent increase from the same month last year.

To cope, many are living with roommates or family — often for far longer than their parents did.

Aaron Ottho, for example, never imagined he'd still be renting a condo with a roommate by the time he hit 40 years old, but months after celebrating his fourth decade, that's exactly the situation he found himself in.

In April, the Vancouver marketing specialist moved into his fourth rental unit — the most expensive yet — since university and like many of his friends, is still far from his dream of home ownership.

"People are taking longer to get married and settle down because they do not feel secure in their lives or their careers, when they're paying that much in rent," said Ottho.

"Almost everyone I know is renting."

The census shows the number of homes shared by roommates increased by 54 per cent between 2001 and 2021, the fastest growth of any household type.

Sharing homes with roommates was more common in downtown regions of large urban centres, especially in cities where large post-secondary institutions were located.

Some of the most interesting shifts Mike Moffatt, senior director of policy and innovation at the Smart Prosperity Institute, has seen between this census period and the last have impacted people in their 20s and 30s, who are prone to living with roommates in small condos or apartments.

The 2021 census showed 39 per cent of Canadians between the ages of 20 and 34 lived without their parents but with a spouse, partner or child, down from almost 50 per cent in 2001.

The number of people in this age group living with at least one parent, roommates or alone simultaneously grew from 51 per cent in 2001 to 61 per cent in 2021.

Immigration is fuelling some of the trend, Moffatt and Athanasiou said.

They found first-generation Canadians with foreign heritage sometimes don't form and live with the nuclear families others do because it’s more traditional or accepted for kids to live with their parents in their cultures.

"In my culture — I'm Greek — it's totally fine for kids to stay home until they're married," Athanasiou said.

The combination of different housing structures and high prices mean many Canadians are getting married and having kids later in life.

"Nobody wants to raise children living in their parents' basement," Moffatt said.

"We're seeing life milestones get extended for 20- to 30-somethings."

When people do have kids, Athanasiou notices they don't want to be far from home. Many of her clients in their 30s rent or purchase properties near their parents, who assist with child care.

Prime Minister Justin Trudeau said such observations are part of why his government restored the long-form census after it was cut by the Conservatives in 2011.

"As we make historic investments in housing … we're doing it from a foundation of knowledge and information," he said at a news conference in Kingston, Ont. "Building policy based on data and facts is something Canadians are understanding is essential and the way forward."