‘Our whole house basically is in the backyard’: Recovery begins after Ontario storm 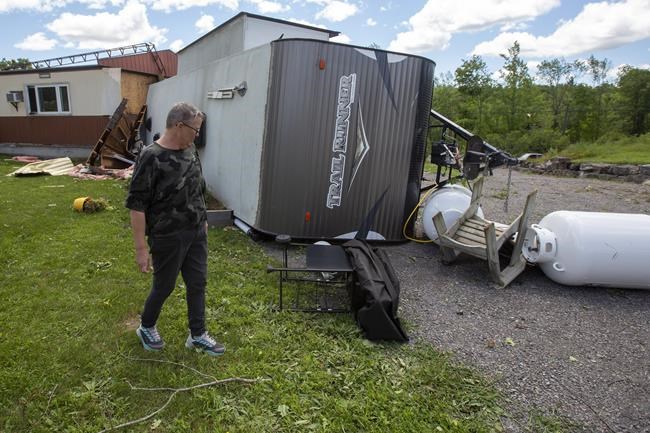 Lynn Prest was rushing to shelter in her basement during a severe thunderstorm when the roof of her home was torn off.

The 56-year-old, who lives with her husband and adult son north of Tweed, Ont., says the storm that barrelled through Sunday night severely damaged her house, downed trees on her property and left many of her belongings exposed to the rain for hours.

"It's something I've never ever in my life seen, ever in a storm. It was so violent and so loud that you can't even describe it."

Prest was among those dealing with the aftermath of a severe thunderstorm that swept through much of southern Ontario on Sunday night.

The Municipality of Tweed declared a state of emergency in light of the storm's damage on Monday, and Western University's Northern Tornadoes Project sent teams to the region north of Belleville, Ont., to investigate an area where one or more tornadoes appeared to have caused extensive damage.

Prest lost power in the storm and said the roads in the area were strewn with evidence of the severe weather.

"The highway is just still a mess," she said. "It will probably be about minimum of a week with no hydro here."

Prest initially hadn't been able to leave her home due to the fallen trees blocking her driveway – leaving on foot wasn't an option because she has brain cancer and had surgery to remove a tumour, along with radiation and chemotherapy treatments, she said.

"We couldn't get out. No one could get in. We were just stranded here," she said. "We had nowhere else to go."

A group of friends and neighbours came together Monday morning to help start clearing the property, she said.

"We've got an unbelievable amount of people with huge loaders and excavators and they have just finally cleared our driveway now so that we can get out," she said.

Sunday's storm knocked out power to thousands of customers.

At the peak of the outage, Hydro One's outage map showed nearly 40,000 customers without power as of midnight. That number fell dramatically overnight, with fewer than 5,000 customers affected by outages as of 1 p.m. Monday.

This report by The Canadian Press was first published July 25, 2022.