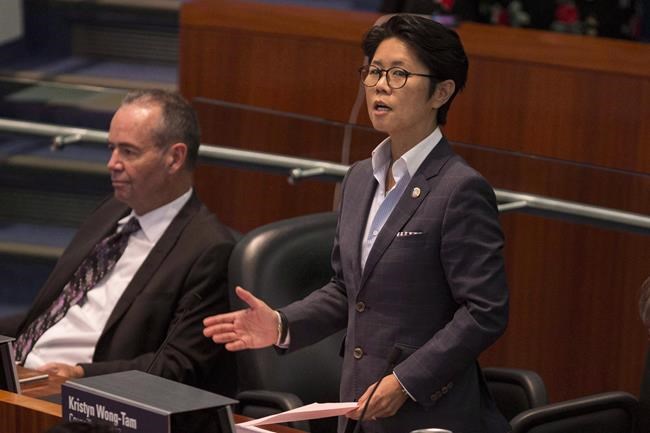 Public Health Ontario reported 326 confirmed cases of monkeypox in the province as of Monday, up from 288 on Thursday.

Those figures came as the Opposition New Democrats said a permanent paid sick leave program would limit the spread of monkeypox and other infectious diseases.

NDP legislator Kristyn Wong-Tam said the isolation recommendation for those who are sick with monkeypox can be 21 days or potentially longer.

She said the government should introduce a permanent program to allow workers to take 10 paid sick days for infectious diseases and 14 additional sick days during public health emergencies.

"The rates of (monkeypox) infection are going up," she said in a news conference on Tuesday. "This is why we're raising the alarm bells that we cannot take any chances of staying quiet."

Ontario currently has a pandemic program offering workers three days of paid sick leave for COVID-19-related absences like testing, vaccination, isolation or caring for relatives who are ill with the virus. The government recently extended that program to the end of March 2023.

Public Health Ontario said the majority of the province's confirmed monkeypox cases are currently in Toronto. It said 11 people with the virus have been hospitalized, including two patients who have been treated in intensive care units. No deaths have been reported in Ontario due to monkeypox.

Public health officials say most cases are among men who report intimate contact with men but say anyone can get monkeypox.

Wong-Tam said the spread of monkeypox is affecting the lives of her constituents in Toronto.

"Church and Wellesley Village was at the epicentre of the HIV/AIDS pandemic, and saw immense damage to main street businesses throughout the COVID-19 pandemic," she said, referring to Toronto's gay village.

"The last thing local small businesses need is another pandemic. In refusing, again, to provide adequate and permanent paid sick days to Ontarians in the face of the growing public health emergency of monkeypox, (Premier Doug) Ford is failing to protect people's health."

A spokesperson for Ontario Labour Minister Monte McNaughton said in a statement that the government has been monitoring the situation but has not made a decision on a new sick leave policy for monkeypox.

The World Health Organization declared monkeypox a global health emergency on Saturday. The organization's director general said the disease has spread to more than 70 countries.

"We know that monkeypox is an infectious disease, spread through person-to-person contact, and ensuring workers can stay home while they're sick is vital if we are to curb the spread and support patients' recovery process," she said during the press conference with the NDP's Wong-Tam.

"Legislating paid sick days through employment standards is the most effective way to contain the spread of all types of infectious diseases in a workplace."

Dr. Eileen de Villa, Toronto’s medical officer of health, said the city had administered about 11,000 monkeypox vaccine shots as of Tuesday. She said interest in vaccination increased after the World Health Organization declared the illness a global health emergency.

Ontario's chief medical officer of health, Dr. Kieran Moore, recently said monkeypox will likely be around for "many months" because of its lengthy incubation period.

The virus generally doesn't spread easily and is transmitted through prolonged close contact via respiratory droplets, direct contact with skin lesions or bodily fluids, or through contaminated clothes or bedding.

The monkeypox disease comes from the same family of viruses that cause smallpox, which the World Health Organization declared eradicated around the globe in 1980. Smallpox vaccines have proven effective in combating the monkeypox virus.

- with files from Holly McKenzie-Sutter.

This report by The Canadian Press was first published July 26, 2022.