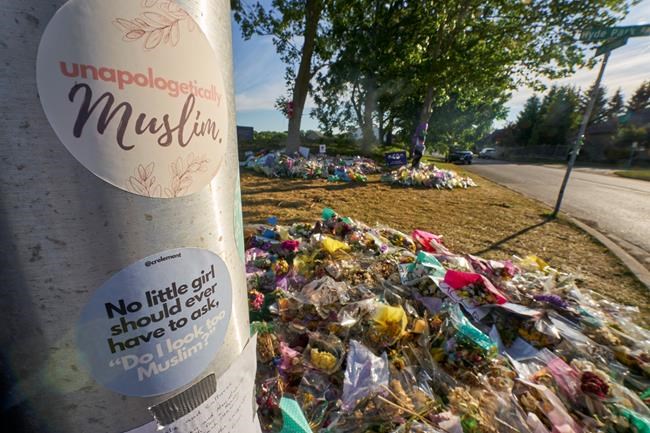 OTTAWA — The head of the Canadian Race Relations Foundation is calling for action to combat hate and more federal help for victims, as new statistics show that hate crimes in Canada rose by 27 per cent last year.

Executive director Mohammed Hashim warned that unless action is taken to combat hate-motivated abuse, including online, it will continue to spread.

He said the "slew of hate" online is so prevalent it risks becoming normalized and those affected are changing their behaviour to deal with it, including by not reading social media comments.

"It is a firehose of hate that is growing, honestly, like a wildfire," he said. "And unmitigated it will grow even further to a point where we will normalize being in a wildfire.

"That is because we have left this environment unchecked."

Statistics Canada reported a dramatic increase in hate crimes in 2021. Last year, the number of hate-motivated crimes reported to the police rose to 3,360 incidents from 2,646 in 2020. This followed a 36 per cent rise in 2020.

In total, the number of hate-motivated crimes recorded by the police has gone up 72 per cent since 2019, according to the agency.

Four Muslim Canadians from the same family were killed in June last year when a man rammed a truck into them in London, Ont. Police have said the attack was motivated by Islamophobia.

Public Safety Minister Marco Mendicino said the figures are "further evidence of the alarming and unacceptable rise of hate that marginalized communities have experienced in recent years."

Mendicino said the federal government is taking action on a variety of fronts, led by new legislation to tackle the rise of hate speech and hate crimes.

"We will not rest until all Canadians feel safe in their communities," he added.

A report by the race relations foundation, published Tuesday, calls for greater federal help for victims of hate, many of whom do not qualify for financial compensation because their abuse does not count as a crime.

Hashim warned that "not supporting victims and leaving hate to proliferate freely disintegrates Canadian multiculturalism as a whole and a sense of collective belonging to this nation."

Hate-motivated crimes targeting a person's religious affiliation were up 67 per cent last year, according to Statistics Canada. Crimes based on a victim's sexual orientation were up 64 per cent year over year. Another 1,723 recorded incidents targeted a person's race or ethnicity, a six per cent increase, and together these categories made up the majority of the overall rise.

Marvin Rotrand of B'nai Brith Canada said Jews were the No. 1 target of hate crimes aimed at religious minorities.

"All Canadians should be worried about the alarming explosion of hate crimes witnessed in 2021," Rotrand said. "Our community comprises 1.25 per cent of the Canadian population but were the victims of 56 per cent of hate crimes aimed at religious minorities. That is more than all other religious groups combined."

Shimon Koffler Fogel, president and CEO of the Centre for Israel and Jewish Affairs, said incidents targeting the Jewish community have risen by 47 per cent since 2020.

“Statistically, Canadian Jews were more than 10 times more likely than any other Canadian religious minority to report being the target of a hate crime," he said.

All provinces and territories reported increases in the number of hate crimes in 2021, except for Yukon, where the numbers remained the same.

Hashim, who regularly tours the country speaking to victims of hate as well as community groups and police forces, said more focus must be put on victims. He said young women are facing huge amounts of abuse online, particularly young Black women.

The Department of Canadian Heritage is working on drafting an online hate bill to set up a framework to combat abuse online.

A previous anti-hate bill, introduced at the tail end of the last Parliament, died when the election was called.

Heritage Minister Pablo Rodriguez appointed an expert panel to make suggestions for a future bill, including faster takedown obligations on platforms, in particular over child pornography.

During a consultation by the federal government last year, some minority groups raised concerns about directly involving the police to combat hate speech online.

Hashim warned against "digital carding" and a mass trawl of content online. He acknowledged there is concern about whether police should be able to access all takedown materials for investigative purposes.

"I don’t think that is the proper way of doing online safety. There need to be checks and balances between how much information is accessible to the police. That is why we have warrants," he said.

"Just creating open access for all police, for all takedown data, for all social media platforms is overkill in my opinion."

The report commissioned by the Canadian Race Relations Foundation, and written by PricewaterhouseCoopers, said 80 per cent of hate crimes go unreported each year.

The report recommends Canada mirror Germany's model for supporting victims of hate with millions of dollars of funding for community groups, which people who encounter hate "instinctively" reach out to, as well as a further victims fund.

It says the government's current compensation schemes exclude many victims of hate because few hate-motivated acts are designated as criminal.

The report also suggests the government establish an emergency response fund for communities hit by hate attacks on a large scale, as well as a central national support hub for victims.

This report by The Canadian Press was first published Aug. 2, 2022.