Arthur Meighen had only been Prime Minister for a month when he visited Toronto on this date in 1920. Accompanied by legendary city Mayor Tommy Church, the PM toured the harbour and held a variety of meetings as Torontonians checked out their nation’s new leader.

Reporters eagerly interviewed Meighen’s wife and mother, with the latter proving quite popular amongst the press. ““Well, if he has brains,” declared Mrs. Meighen, “he gets them from his father, but if he has grit and determination, he gets that from me.” 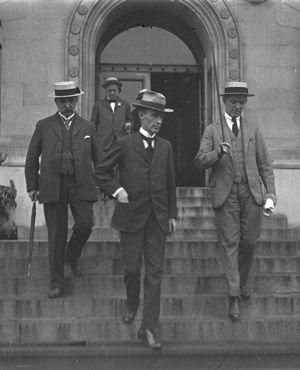 You can read the Star’s full coverage of the Prime Minister’s visit below.

Follows Laurier in Regard to Interviews

Displaying his best brand of humour and in a happy frame of mind, Premier Meighen, who is spending the day here as the guest of the city, talked and joked freely with officials and newspapermen, but good-naturedly declined to make any serious statement.

When newspapermen sought an interview in the National Club, he played a little joke on them.

“Yes, I have a long statement to give out that I have just written. It’s a good interview—the most I ever said,” he announced, and the scribes craned their necks as the Prime Minister dug down in his trouser pockets. “Here it…,” he laughed, pulling out a roll of bills. “That’s a good statement,” he laughed, as he put back the bills.

“No, I have nothing to say,” he added in a more serious tone. “I’m here today and I’ll be in Hamilton tomorrow and all is well,” he finished, still smiling, probably at the look of disappointment on the scribes’ faces.

The Premier, accompanied by Mayor Church, spent two hours during the forenoon abroad the Harbour Commissioner’s steam yacht Bathelma, in making a thorough inspection of the improvements now under way at both the city’s and government’s expense and, when it was all over, when asked for his views on the situation, said: “Why speak of the commonplace?” “Do you not think this waterfront is worth spending money on?” he was asked. The Premier smiled.

“You go and collect all the interviews given by the late Sir Wilfrid Laurier and read them over; then come and ask me,” he advised. As Sir Wilfrid always declined to be interviewed after having been once misquoted, the newspapermen suggested that every premier, according to Sir Wilfrid’s hard precedent, should allow at least one misquotation before declining to be interviewed. “Oh, I’ve been misquoted a hundred times,” smiled the Premier.

The Premier evinced great interest in every phase of the harbour works. Upon reaching the ship channel at the eastern end of the works, the party went ashore and walked about for nearly a mile spending considerable time at Baldwin’s Canadian plant. Here President A. M. Russell of Baldwin’s explained to the Premier just what was being done. “We are getting along nicely,” said Mr. Russell, when asked by the Premier how the company was meeting the power shortage.

The extent of the ship canal—400 feet across with a depth of 24 feet—impressed the Premier. He agreed with the Toronto men that most desirable factory sites had been created by the improvements.

In passing the Island Stadium, Mayor Church remarked that “Billy” King would be holding a big picnic meeting there tomorrow. The Premier smiled, and the mayor added: “But it’s going to rain tomorrow, Mr. Premier.”

Upon their arrival at the Harbour Commissioner’s dock the party was taken in motors to the King Edward Hotel, where the mayor had arranged a private complimentary dinner of a non-political nature in honour of the Premier…

“How’s The Star?” greeted Honourable Arthur Meighen, Prime Minister of Canada, extending his hand off the Canadian National from Ottawa early this morning. “Working hard like yourself,” answered the newspaperman. “That’s right,” agreed the Premier.

Characteristically Premier Meighen twice forgot his watch upon leaving the train. Running his fingers through his vest pockets he made the discovery, that the truly timepiece, which he must follow closely these busy days, was missing. He hurried back to his room in the car to find it. But before he reached his room it occurred to him that he ought better tell Dr. Charles Sheard, MP for South Toronto, about the arrangement he made for taking breakfast at the National Club, a short talk followed and the Premier and Mrs. Meighen prepared to leave the car again. “Oh, my watch,” Mr. Meighen reminded himself, and back he went again this time returning with the ticker.

“He forgets some things for a minute, but he remembers everything in the end and that’s what counts,” observed Mayor Church who with Dr. Sheard received the distinguished visitors to Toronto.

Accompanying the Prime Minister and his wife were Mr. and Mrs. Meighen, senior. When the train pulled into Union station shortly before eight o’clock, they were in the living room of their private car. The Premier was shaving.

“He’ll cut himself and spoil his good looks,” remarked the Premier’s mother good naturedly. She didn’t quite approve of her son shaving on the train, but under the circumstances he would just have to be careful.

Gets Brains From Father

When told that a representative of The Star was present Mrs. Meighen, senior, recalled stories written about herself after her son had been called to the premiership. “Did you read the story in the Toronto papers about me baking bread?” she laughed. “Well, that was true all right. But I told the girl reporter not to put anything about that in the paper, and she said she wouldn’t put anything in that was wrong.”

“We saw some good pictures of you and Mr. Meighen in our papers, a whole page of them in The Star,” added the mayor. “Oh the papers yes, the Toronto papers are all right,” agreed Mrs. Meighen. A member of the party was curious to know who the Premier followed in his habits and nature. “Well, if he has brains,” declared Mrs. Meighen, “he gets them from his father, but if he has grit and determination, he gets that from me.”

Inquiries for “Arthur” at this point brought the information that the Premier was still shaving. Meantime the train crew began shunting the cars to another track. “He shouldn’t shave on the train,” asserted Mrs. Meighen, apprehensively. That her son was working too hard she asserted with equal emphasis.

“I wish he could cancel that Hamilton visit and get a rest; he needs a rest,” she declared. “Will you try to get him to cancel his engagements for a day or two?” she asked Dr. Sheard. “I’ll have a talk with him,” promised the local MP, who has been a friend of the Meighens for many years. “Yes, I wish you would. I want him to get fit,” continued Mrs. Meighen. “He works every minute of the day, and do you know the other night he was writing all the time until the train left. He works all day in his office and he has to speak so often, I wish you could get him to rest.”

When the Prime Minister made his first appearance shaved and smiling, he did not look as tired as his mother judged him. Unhesitatingly, he had a smile and a word for everyone around him and the matter of where he would take breakfast was uppermost in his mind. Dr. Sheard extended an invitation to go to his home in Jarvis Street, but the Premier expressed a wish to meet some Toronto people at the National Club, so the Premier and Dr. Sheard went to the club and the Premier’s wife and parents motored to Dr. Sheard’s residence.

When The Star photographer asked permission of Premier Meighen to take a photograph of Mrs. Meighen upon her arrival at the National Club today, the Prime Minister smilingly asserted that he had no authority in the matter. “You’ll have to ask Mrs. Meighen,” he said. Mrs. Meighen, however, thought it was for the Premier to say. Thus burdened with the responsibility the Premier requested Mrs. Meighen to stand beside him for a snapshot. “My goodness I feel foolish,” she remarked and everybody chuckled.