The world’s eyes were on Placentia Bay, Newfoundland on this date in 1941 where U.S. President Franklin Roosevelt and British Prime Minister Winston Churchill had held talks the previous three days. They signed the Atlantic Charter which was announced to the world on August 14, 1941.

The agreement made it clear that FDR and America supported Britain and her allies in these early days of the Second World War, though the USA was not officially part of the conflict. That would come later after the Imperial Japanese attacked the U.S. at Pearl Harbor in December 1941. 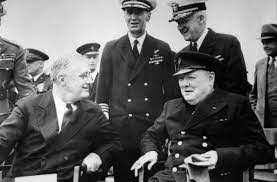