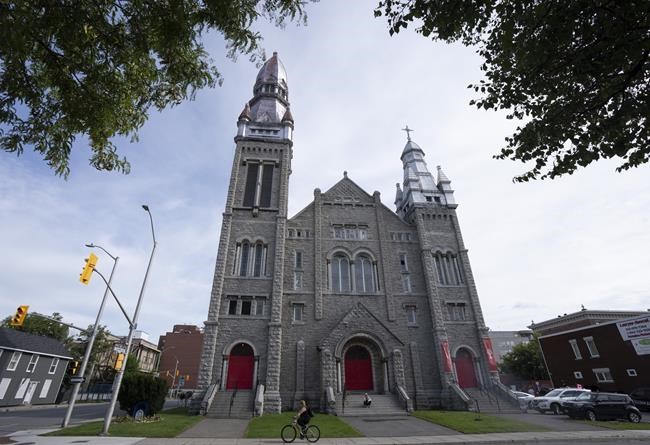 OTTAWA — An Ottawa-based group with suspected ties to the "Freedom Convoy" says it was threatened with eviction Wednesday and is ready to take its cause to court in an attempt to set up headquarters in the country's capital.

The United People of Canada,or TUPOC,moved in to a deconsecrated church in downtown Ottawa this summer as part of a conditional offer to buy the space.

The heritage building is now draped with large red banners featuring the group's logo: a tree with thirteen maple leaves meant to symbolize the provinces and territories.

The group calls the building an "embassy," and describes itself as a "diverse, intergenerational fraternal organization."

TUPOC board member William Komer said members called police Wednesday evening after the landlord's agent showed up and unsuccessfully attempted to kick them out of the building.

A second attempt by a bailiff to change the locks on the church was made Thursday but again he was rebuffed and police called.

"We're still lawfully occupying the building, from our perspective that speaks for itself," Komer said in an interview Thursday. "Our perspective is we're victim of discrimination."

The landlord accused the group of falling behind on $10,000 worth of rent, making changes to a heritage building without a permit and failing to show proof of insurance.

Police said they were called to keep the peace during a dispute between a landlord and a tenant of the building.

The attempted eviction follows weeks of conflict between members of the group and their neighbours. Local residents have protested TUPOC's continued presence in the community and see it as an opportunity for convoy supporters to set up a permanent outpost in Ottawa.

The church is just a few minutes walk from the parliamentary district, and is not far from where big rigs and other trucks clogged streets for three weeks last winter to protest COVID-19 restrictions and the Trudeau government.

The group claims to have no connection to the protest, though several members of the board have ties to the "Freedom Convoy" movement.

Komer said the group has posted private security around the building and is prepared to take legal action if police don't take "appropriate action" to investigate the eviction and other allegations of vandalism and illegal protest against their group.

Diane Nolan, who also sits on the board, spoke about the group's mission in the community in a 20-minute Facebook video Thursday, though the precise objectives of the group remain unclear.

She also spoke repeatedly about the convoy protest.

"The whole world needs to know that event transformed hearts and minds, because guess where we are right now? We're in an uprising," she said in the video.

"We need to start talking about gathering, a bigger gathering. It's not about a convoy. It's about an uprising."

The group's website also promotes community conversation sessions about the convoy, sponsored by a website that offers "community-based research" about injuries related to COVID-19 vaccines.

When news of the eviction attempt spread online, several known convoy participants announced they would lend support to the group and travel to Ottawa. Tyson "Freedom George" Billings, who pleaded guilty in June to counselling mischief during the winter protest, also encouraged fellow supporters to head to the church to prevent the eviction.

The group's future in the church space remains unclear now that the owner has attempted to evict them. Though The United People of Canada put in a conditional officer on the building, an active real-estate listing for the building is currently posted online.

Several community groups have circulated a petition to halt the sale of the building to TUPOC, arguing the organization "does not have the community’s best interests in mind."

Komer said the group's lawyers are in discussion, and are considering an Ontario Human Rights complaint against the landlord.

This report by The Canadian Press was first published Aug. 18, 2022.