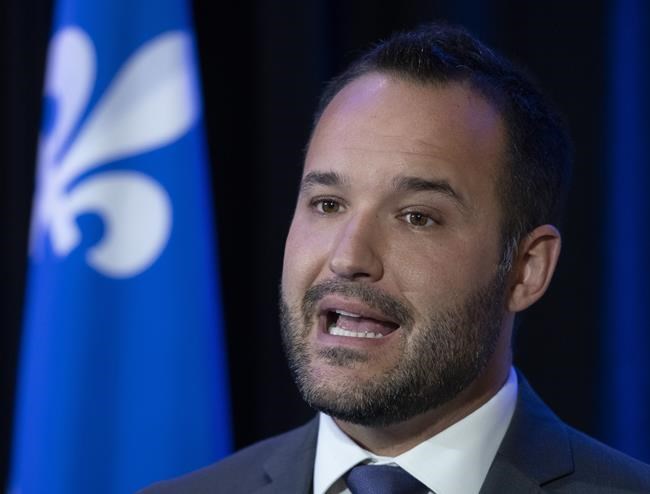 MONTREAL — Quebec's official election campaign isn't expected to start for at least another week, but the province's governing party has already made billions of dollars in promises.

Families Minister Mathieu Lacombe told reporters Friday that if the Coalition Avenir Québec is re-elected it would spend $1.4 billion over five years to convert more than 56,000 unsubsidized daycare spots into subsidized spaces.

"Within five years, every Quebec toddler will be able to have a subsidized place, at $8.70 (a day), in a quality educational daycare. That also means equity — finally — equity for all Quebec parents," he said.

The campaign promise was one of several that members of Premier François Legault's government have made in recent days.

The Liberals released their full election platform in June and the Quebec Conservative Party released its platform last week.

Philippe Dubois, a professor of public and political communication at Quebec's school for public administration — École nationale d'administration publique — said the early start to the campaign is partially a result of Quebec's fixed election date, which has been the law since 2013.

The law states that Quebec must have an election on the first Monday of October, every four years; there are some exceptions. And the campaign has to be between 33 and 39 days.

All five parties with seats in the legislature have had time to prepare their platforms and want to show the public that they are ready, that they have a strong vision and that they can create momentum around their candidates, Dubois said.

Dubois said he's not worried that voters will confuse the CAQ's partisan campaign promises for official government proposals, because he said Legault has made it clear that his government wouldn't make spending announcements after July 1.

"It was a wise decision on (Legault's) part and it protects him from being accused of using public money or state resources for partisan purposes," Dubois said.

But with Legault's government campaigning on its record — and promising to continue the work it has done over the past four years — Dubois said it's no accident that ministers like Lacombe and Dubé are making promises related to their portfolios.

"It allows them to show this continuity and to associate the ministerial image with the political image," he said.

Guy Lachapelle, a political-science professor at Concordia University, said it's typical to see parties making promises before the start of the official campaign.

"It's nothing new in Quebec politics," he said in an interview. But in the middle of summer, he said the only people paying attention are those who follow politics closely. The real campaign, and when voters make decisions, will come after Labour Day, Lachapelle said.

Friday's promise was praised by a group that represents private, unsubsidized daycares, which said the money will create a more inclusive system. Marie-Claude Collin, the president of the Coalition des garderies privées non subventionnées du Québec, said parents don't often have the means to pay for quality private daycare.

While private daycares often charge around $40 a day, she said that's not enough to pay educators and cover other costs.

"Having a subsidized space will not only help the owner of the daycare, it will, above all, help the parent who sends their child to daycare," she said in an interview, adding that it will also allow private daycares to also offer more specialized services to children with special needs.

This report by The Canadian Press was first published Aug. 19, 2022.

— With files from Pierre Saint-Arnaud.