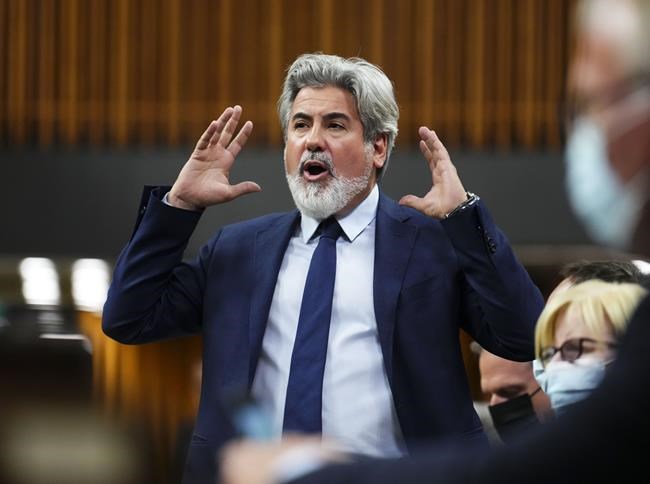 OTTAWA — Heritage Minister Pablo Rodriguez broke his silence on Wednesday over his department's funding of an agency whose senior consultant posted a series of tweets about "Jewish white supremacists," more than a week after the government cut off the money.

"Racism in any form has no place in Canada. I condemn the disgusting antisemitic comments made by Laith Marouf," Rodriguez said in a written statement to The Canadian Press.

"I have no tolerance for this."

Rodriguez also said the Community Media Advocacy Centre, which Marouf works for as a consultant, should never have received "a cent of taxpayer dollars" and the Liberal government is reviewing the vetting process to ensure it does not happen again.

His remarks mirror those of Prime Minister Justin Trudeau, who on Tuesday said he was launching a complete government review of funding to CMAC.

"It is absolutely unacceptable that federal dollars have gone to this organization that has demonstrated xenophobia, racism and antisemitism," Trudeau said.

Last week, Diversity Minister Ahmed Hussen cut $133,000 in Heritage Department funding to the CMAC and suspended an anti-racism project it was overseeing after "reprehensible and vile" tweets posted by Marouf came to light.

On Monday, Liberal MP Anthony Housefather, who is Jewish, posted a tweet urging all 338 members of Parliament to condemn antisemitism, after which a significant number of Liberal MPs began speaking up about the issue.

Rodriguez had not commented until the statement sent Wednesday.

Conservative MP Melissa Lantsman, who is also Jewish, had criticized Rodriguez for not speaking out about the tweets.

"The most vile thing about this is the silence,'' she said.

Marouf's Twitter account is private, but a screenshot posted online showed a number of tweets with his photo and name.

One tweet said: "You know all those loud mouthed bags of human feces, a.k.a. the Jewish White Supremacists; when we liberate Palestine and they have to go back to where they come from, they will return to being low voiced bitches of thier (sic) Christian/Secular White Supremacist Masters.''

CMAC has not responded to requests for comment. A lawyer acting for Marouf asked for his client's tweets to be quoted "verbatim'' and distinguished between Marouf's "clear reference to 'Jewish white supremacists''' and Jews or Jewish people in general.

Marouf does not harbour "any animus toward the Jewish faith as a collective group,'' lawyer Stephen Ellis said in an email to The Canadian Press.

"While not the most artfully expressed, the tweets reflect a frustration with the reality of Israeli apartheid and a Canadian government which collaborates with it,'' Ellis added.

This report by The Canadian Press was first published Aug. 31, 2022.