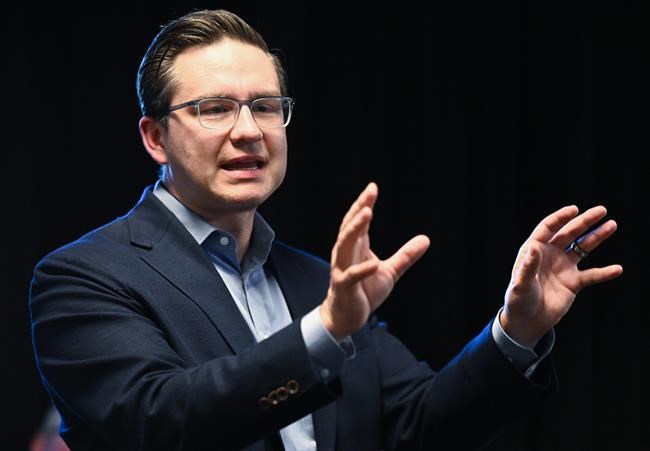 OTTAWA — Pierre Poilievre's first words in the House of Commons were a sure sign of things to come.

It was October 2004, and though at 25 years old he was one of the youngest faces in the room, he had beenpreparing for this moment.

As a teen, he had read economist Milton Friedman's 1962 book "Capitalism and Freedom." At 15, he had joined the board for his member of Parliament in Calgary, Preston Manning. By 20, he had penned an essay about being prime minister.

In university, Poilievre led his campus conservative club. He learned the ropes of campaigning from political heavyweights such as Jason Kenney and Stockwell Day.

So when Poilievre rose to speak for the first time as an MP, he knew exactly what he was doing. He went straight for Paul Martin's jugular: "The prime minister has engaged in a smorgasbord of patronage that is so impressive it would make even his predecessor blush."

Eighteen years later, what strikes those who knew him then is how little the 43-year-old has changed.

"He was fully prepared on day one to stand up in question period and go right after the prime minister," said Jeremy Harrison, a Saskatchewan cabinet minister and former Conservative MP who was elected in his early 20s alongside Poilievre.

Poilievre, one of the first people elected under the banner of the federal Conservative Party of Canada, is now the presumptive front-runner in the contest to become its next leader.

If he was already a firebrand then, his image has been made even more polarizing by his embrace of the anti-lockdown vein of right-wing populism that fuelled this year's "Freedom Convoy."

Looking back on his early career offers a glimpse into his making as one of the most divisive figures in Canadian politics.

It was easy to underestimate Poilievre, back then — at least, before he opened his mouth.

When Poilievre ran for his federal seat in what was then the Ottawa-area riding of Nepean-Carleton, the first-time candidate was a gangly 24-year-old upstart looking to take it from popular Liberal David Pratt, who was then the minister of national defence.

"I swear to God, I looked like I was 14," he said during a panel discussion about youth in conservative politics, back in 2009, recalling reactions to a photo distributed on campaign materials during the dying days of the campaign.

"Our office started getting so many calls asking, 'How old is this kid? Can he actually vote for himself in this election?'"

But Poilievre proved himself a quick study and an enthusiastic door-knocker with a knack for connecting with people, including teens he recruited to volunteer on his campaign.

In Parliament, the high-energy, baby-faced MP earned the nickname "Skippy" and showed his prowess for debate and a penchant for coining catchy phrases, slamming the Liberals' proposed national daycare program in 2005 as "the great government babysitting bureaucracy."

Poilievre's profile continued to rise once the Conservatives took power in 2006 under former prime minister Stephen Harper, another of his teachers.

Harper appointed him as his parliamentary secretary in 2008 and he was trotted out as the government's defender-in-chief. Poilievre's scrappy style and impressive command of various political files — served with a twist of self-satisfaction, critics say — made him the Conservatives' go-to attack dog.

Former Tory MP Scott Armstrong remembers that when Poilievre spoke, he and his caucus colleagues would take notes on his delivery.

"I watched how he sort of handled himself, physically," said Armstrong, who would later become parliamentary secretary to Poilievre during his brief stint as employment minister in 2015.

"He was probably our most effective communicator," recalled Armstrong. "He can actually get the Conservative message out."

Poilievre seems to know that his talents are rare. During his 2009 speech to young conservatives, he dubbed communication Parliament Hill's "most demanded and least possessed skill."

"I have found it a real struggle to hire people who know how to write in language that real people understand," he said.

Poilievre's mouth has also got him into trouble.

In 2006, he was caught scoffing "f--- you guys" under his breath to members of a parliamentary committee, the young MP wearing glasses, a roomy blue pinstriped jacket and centre-parted hairstyle popular in the late '90s.

And in 2008, Poilievre apologized after questioning in a radio interview whether Canada was "getting value for all of this money" by compensating Indigenous residential school survivors. He also suggested they should instead work harder — making those comments hours before Harper delivered a historic apology in the House of Commons for the country's wrongdoing.

"It showed to me just a real lack of judgment," said Charlie Angus, a longtime NDP MP, in an interview.

Poilievre's judgment was questioned again in 2010 when, one day, he grew so impatient waiting in his car to go through Parliament Hill's security check that breached protocol by pressing a button to let himself through.

If the brash way that Poilievre presented himself in those early years had significantly evolved over the course of his time in the Commons, Angus would have been there to see it. But he says today that Poilievre "hasn't really transformed from that."

Despite those few exceptions, or perhaps because of them, by Poilievre's early 30s his message discipline was becoming a well-oiled machine. His caucus colleagues began to notice that he was adding physical discipline to his arsenal, too, with a vigorous workout routine.

He was still young, but a little less gangly, when he was appointed to Harper's cabinet in 2013 as democratic reform minister.

Chris Alexander was appointed to oversee immigration during the same cabinet shuffle. He described Poilievre as being open about his lack of life experience outside of politics and eager to make up for it.

"He always had a book, or was talking about what he was reading, and asking what the rest of us are reading," Alexander said.

Poilievre was tasked with shepherding through controversial legislation altering Canada's election regime. It included a provision outlawing "voter vouching," or allowing a person without documentation of their name or address to bring someone to the polls to vouch for their identity. Critics argued this could lead to the disenfranchisement of voters. The current Liberal government has since reversed that policy.

When then-chief electoral officer Marc Mayrand criticized the proposed law in 2014, Poilievre attacked his motives: "He wants more power, a bigger budget and less accountability," he said during a Senate committee meeting.

Former NDP MP Craig Scott, the party's critic on the issue, said that a well-known antagonist being the face of the bill made it easier to drum up public opposition.

Scott mused that people already suspicious of the Harper government tended to read ulterior motives into everything Poilievre touched. They'd think, "Because this is Pierre Poilievre, surely something even more is going on," he said.

Despite his prickly exterior, those who worked more closely with Poilievre say the well-prepared MP was always funnier, kinder and more down-to-earth than his performances implied.

Those who were there to see his beginnings have stuck around.

Former Conservative cabinet minister John Baird, then a political mentor, now serves as his campaign chair. Jenni Byrne, a longtime party operative whom Poilievre dated in his early career, is a senior aide on his team. His wife, Anaida, whom he married in 2018, also works as a political staffer on Parliament Hill.

They're believers in the recipe for political victory that Poilievre had shared with Conservative youth earlier in his career.

"If you want to be successful in Conservative politics," the young Poilievre instructed, "you have to stand for something."

"You have to stand for ideas that excite large numbers of people. Electricians, mechanics, carpenters, everyday working people that might not be totally fascinated by politics."

Poilievre has grown up in public. He spent his the past 18 years crafting a reputation for being a bold and to-the-point communicator, cutting to the chase in a way that made critics curse him, opponents loathe him and colleagues admire him.

Now, the career politician might be about to put the days of defending other leaders' policies behind him.

This report by The Canadian Press was first published Sept. 5, 2022