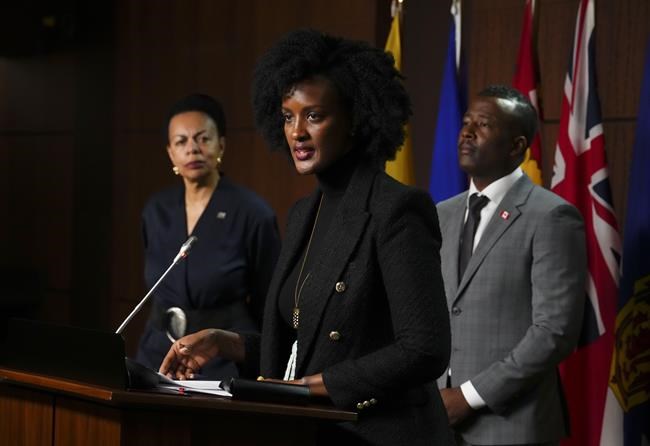 OTTAWA — A group of Black civil servants is filing a complaint to the United Nations Commission for Human Rights accusing the federal government of racism, racial discrimination, xenophobia and intolerance.

NDP Leader Jagmeet Singh and Amnesty International Canada are supporting the latest move from workers who filed a class-action lawsuit against the federal government in 2020 alleging systemic discrimination in how it hires and promotes thousands of public servants.

It has become clear that the federal government is not acting in good faith on the issue, says Nicholas Marcus Thompson, executive director of the Black Class Action Secretariat, the organization that is leading the lawsuit.

"The reason why we're elevating this issue is because Canada continues to delay, it continues to utilize its vast resources to deny Black workers in the court," he said.

"Black Canadians are going to wait a very long time for justice within Canada, so we have turned to the international community to hold Canada accountable to international obligations."

Mona Fortier, president of the Treasury Board, is slated to meet with Thompson this week. In a statement, she said far too many Black Canadians still face discrimination and hate.

"The government is actively working to address harms and to creating a diverse and inclusive public service free from harassment and discrimination. We passed legislation, created support and development programs, and published disaggregated data—but know there is still more to do," the statement said.

The lawsuit filed in Federal Court alleges that some 30,000 Black civil servants have lost out on "opportunities and benefits afforded to others based on their race" going back to the 1970s.

The statement of claim says the lawsuit is seeking damages to compensate Black public servants for the mental and economic hardships they faced. Plaintiffs are also asking for a plan to finally diversify the federal labour force and eliminate barriers that even employment equity laws have been unable to remove.

Critics including Singh and Thompson say the federal government is purposely dragging its heels in court. "This Liberal government continues to say one thing to Black Canadians, and then do another when it comes down to it," said Singh.

In her statement, Fortier said the court has sent out the next steps and timeline in the court process. "The government will respect these requirements," she said.

"Under international law, Canada has a positive obligation to address discrimination. This means that Canada must take special and concrete measures to eliminate discrimination in employment," she said.

This report by The Canadian Press was first published Sept. 28, 2022.