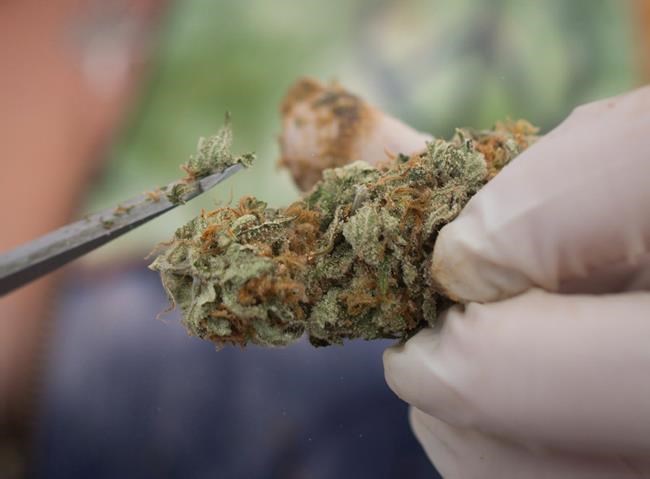 OTTAWA — Canada’s financial intelligence agency says a wide range of businesses — from food wholesalers to electronics repair services — are being used to disguise the proceeds of illicit cannabis operations.

In a new operational alert, the Financial Transactions and Reports Analysis Centre of Canada, known as Fintrac, warns banks and others that handle cash to be on the lookout for various clues that dealings are linked to the black-market pot trade.

Canada legalized the recreational use of cannabis four years ago and set out a legal framework for production, sale and possession of the drug.

However, 37 per cent of respondents to the federal government’s 2021 cannabis survey said they obtained some or all of their pot from illegal or unlicensed sources.

Fintrac says the illicit cannabis market denies public coffers significant tax revenue, while profits in the tens of millions of dollars are used by organized crime groups to finance other illegal and harmful activities.

“If you're purchasing cannabis illegally online, you are in fact providing money to organized crime,” said Barry MacKillop, deputy director of intelligence at Fintrac.

Crime groups will then disguise that money and use it to purchase cocaine or guns, traffic people, exploit children and snap up real estate, he said.

As a result, whether Canadians know it or not, they’re helping finance other criminal activity in their communities, “which is making themselves and their neighbours unsafe, in terms of where they want to live and how they want to live,” MacKillop said.

Fintrac worked with law enforcement and Canada’s major banks to develop the operational alert to advance Project Legion. The project, a public-private partnership led by Toronto-Dominion Bank, aims to build awareness of the harm associated with the shady cannabis trade and better detect the laundering of proceeds.

Fintrac tries to uncover evidence of money laundering and terrorist financing by sifting through suspicious transaction reports supplied by more than 24,000 businesses — from banks and money-transfer services to real estate brokers and casinos. In turn, it passes the resulting financial intelligence to police and security agencies.

The agency analyzed a sample of about 5,000 suspicious transaction reports, received from March 2020 to March 2021, related to illicit cannabis activities. While the majority of these involved the suspected sale and distribution of pot from unlicensed online dispensaries, some were tied to the possible production of illicit weed.

“Often there were little to no business-related transactions in the accounts held by these front companies which were owned by suspected distributors and producers of illicit cannabis, their associates and other members of their networks,” the operational alert says.

“Many of these individuals owned more than one business and would transfer funds between their business and personal accounts and those of their associates, with no clear purpose.”

The analysis yielded several indicators, or red flags, that could suggest laundering of cannabis proceeds. Fintrac cautions that a single indicator might not initially appear suspicious, but could prompt a look at other facts, contextual elements or additional indicators that may heighten concerns.

Indicators tied to the cultivation, processing and preparation of illicit pot included large purchases at hydroponics retailers and unusual utility payments, such as multiple individuals paying off the same hydro account, or over-the-counter payments in cash.

Among the indicators linked to online unlicensed cannabis dispensaries:

— transaction details make reference to terms such as weed, pot, bud or leaf;

— numerous purchases at packaging, shipping or mail service businesses; and

— the wholesale purchase of humidity-controlled packaging from specialty suppliers.

In some case, networks of numbered companies operated possible passthrough accounts for an unlicensed dispensary, the alert says. Although these entities were listed in very different industries, they were linked through financial flows, shared electronic money transfer contact information or the same authorized signatories.

The COVID-19 pandemic accelerated the phenomenon to some degree because “everybody was purchasing everything online when things were closed,” MacKillop said. “And this was just another way that organized crime could exploit that and use the online presence to sell their illegal cannabis.”

This report by The Canadian Press was first published Sept. 28, 2022.