Canadians in Florida dealing with fallout from Hurricane Ian 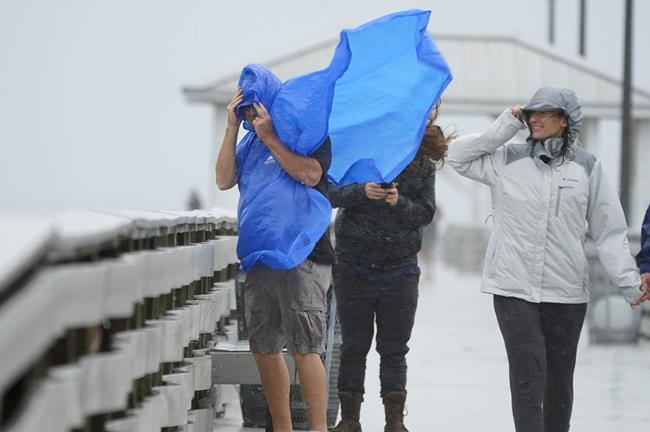 Tiffany Thomas headed to a Tampa-area hospital being used as a shelter in search of a cellphone signal and internet on Thursday after Hurricane Ian knocked out power and phone service in her neighbourhood overnight.

The Winnipeg woman who lives in Valrico, Fla., said she managed to ride out Wednesday's massive storm safely at home with her husband and their three young children but the family was dealing with the aftermath the following day.

"There is a large oak tree that fell and took the power lines with it," the 42-year-old said in a phone interview. "My home is fine. It's one year old so we have a new roof, new windows that are higher-winds resilient."

Thomas said her children, who are between the ages of eight and 13, were worried as the lights kept flickering on and off until power cut out completely around 1 a.m. Thursday.

"This is their first real hurricane, so (my children) were very scared ...We were watching the news and they were very scared for the people just an hour-and-a-half south of us," she said, referring to flooding that had taken place in another community.

Thomas said restaurants, convenience stores and gas stations near her home were all closed, the neighbourhood was littered with fallen trees, traffic lights weren't working and several homes were damaged.

She said she took advantage of the cellphone service and internet available at the hospital to get in touch with clients she was meant to teach an online course to on Thursday to let them know it was being cancelled.

Ian made landfall in Florida as one of the strongest hurricanes ever to hit the United States. The massive storm flooded homes on both coasts of the state, destroyed a historic waterfront pier and knocked out electricity to 2.67 million Florida homes and businesses.

Thomas, who has been living in Florida since 2003, said she and her family had prepared for the hurricane, but the fierce storm had demonstrated they could have done more.

"We have learned that as soon there is a threat of any type of hurricane that the stores are cleared out right away," she said.

"We've already learned to stock up on batteries, stock up on candles, flash lights ... so we don't have to prepare every time a storm comes ... We don't have a generator which is probably where we might have dropped the ball."

In Palm Beach, Fla., Summer Willett had also stocked up on food, water and other basic supplies ahead of the hurricane.

The Cornwall, Ont., woman travelled south recently to spend a couple of months with family but her visit took an unexpected turn as the hurricane approached.

"We're buying water and canned food and flashlights and stuff like that," the 26-year-old said in a phone interview before the storm hit the east coast. "We're going to do our best to stay inside and keep safe."

For snowbird Barbra Kenyeres, news of the hurricane brought on a flood of concern for friends and neighbours in Fort Myers, Fla., where she has a home.

The 66-year-old Muskoka, Ont., woman said she and her husband planned to travel south in a few weeks. She said she had been trying to get in touch with friends in Florida since Wednesday afternoon but hadn't had any luck.

"Just making sure that everyone is alive. I guess that's the most important thing."

Kenyeres said she hadn't yet been able to find out if her home had been damaged by the hurricane.

Evan Rachkovsky, the director of research and communications of the Canadian Snowbird Association, said the vast majority of Canadian snowbirds have not moved to Florida for the winter yet.

"Typically, they leave Canada and go to Florida in November," he said in an interview.

Members of the national not-for-profit advocacy organization have been mostly asking about the right steps to take in case the hurricane damages their properties in Florida, Rachkovsky said.

"The advice: only go visit your property when it's safe to do so when you're given the OK from the local officials down there."

- with files from The Associated Press.

This report by The Canadian Press was first published Sept. 29, 2022.