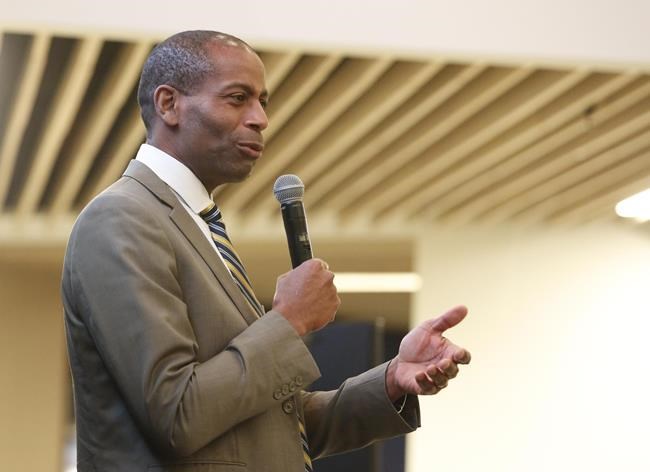 The letter was submitted to the Canadian Radio-television and Telecommunications Commission last week to encourage required distribution of Natyf TV, which serves a multicultural francophone audience, as part of digital basic services.

Fergus, who represents the Quebec riding of Hull-Aylmer, is also parliamentary secretary to Prime Minister Justin Trudeau and Treasury Board President Mona Fortier, and he has served as head of the Liberal Black Caucus.

Written guidance from the federal conflict of interest and ethics commissioner says cabinet ministers and parliamentary secretaries "must not under any circumstances" attempt to intervene in the decision-making process of an administrative tribunal, such as the CRTC, on behalf of any constituent in any riding.

The commissioner says such contact may be considered an attempt to influence a decision, which is a breach of the Conflict of Interest Act.

In response to questions about his letter, Fergus called it an "honest mistake."

"I'm going to have to assume responsibility for this and find out what needs to be done."

The Canadian Press came across Fergus's letter during a routine examination of filings with the CRTC.

Section 9 of the Conflict of Interest Act prohibits a public office holder — as ministers and parliamentary secretaries are known — from using their position to try to influence decision-making when doing so would improperly further the private interests of another person.

Parliamentary secretaries, though not members of cabinet, serve as key representatives of the government and as important links between ministers and Parliament, says a federal guide on the prime minister's website.

A parliamentary secretary supports his or her minister by helping advance the government's legislative program, speaks in the House of Commons in the minister's absence, acts as a liaison between the minister and caucus and may be given specific duties for policy development or public engagement.

In an interview Tuesday, Fergus said he contacted the commissioner's office after The Canadian Press inquired about the letter.

Fergus said he has always tried to be careful to stay "well inside the lines" when it comes to respecting ethics rules and would follow up with the commissioner.

The letter is dated June 28, 2021, but was submitted to the CRTC only on Sept. 28 of this year. Fergus was a parliamentary secretary in June last year as well.

Fergus said a constituent associated with Natyf TV asked him to provide a letter. "I said, 'Of course — of course, I'm happy to write a letter of support for it. So I did."

In a Sept. 21 notice, the CRTC invited comment on the channel's application in advance of a hearing slated for January next year.

In the letter, which Fergus said was drafted for him, the MP offers full support to the television channel and says he hopes the broadcast regulator will give the matter particular attention.

The submission is on Fergus's member of Parliament letterhead, and makes no mention of his role as a parliamentary secretary.

This report by The Canadian Press was first published Oct. 4, 2022.