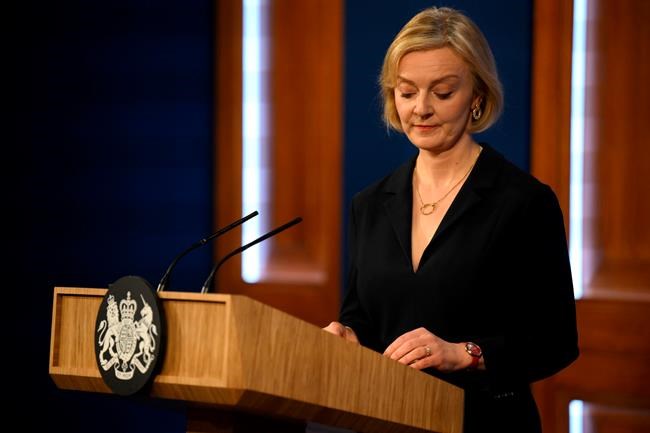 LONDON (AP) — Powerless, humiliated, labeled a “ghost” prime minister and compared unfavorably to a head of lettuce — this is not a good week for Liz Truss.

Britain’s prime minister was scrambling to recover her grasp on power Tuesday after her economic plans were ripped up and repudiated by a Treasury chief whom she was forced to appoint to avoid meltdown on the financial markets.

Truss remains in office, for now, largely because her Conservative Party is divided over how to replace her.

In a bid at business as usual, Truss held a Cabinet meeting on Tuesday, where, her spokesman said, there was an “in-depth discussion” of the new economic plan, and no one asked her to resign.

Truss also met lawmakers from rival Conservative factions, arguing that keeping her in post can provide stability, even though she has had to ditch almost the entire prospectus on which she was elected party leader just six weeks ago.

Chastened but defiant, Truss acknowledged Monday that “mistakes were made” — but insisted she would lead the Conservatives into the next national election.

Few believe that. Britain’s lively, partisan press is unusually united in the opinion that Truss is doomed. The Conservative-backing tabloid The Sun called her “a ghost PM” and said “for the sake of the country, we cannot go on like this.” The left-leaning Guardian compared the Conservatives to a mutinous ship’s crew, saying “Truss has not left her party. But it appears to have left her.”

After The Economist said Truss’ time in control of the government — before the Sept. 23 “mini-budget” that set the markets aflame — was “roughly the shelf-life of a lettuce,” the tabloid Daily Star set up a livestream featuring a photo of the prime minister beside a head of iceberg, adorned with a blond wig, eyes and a mouth. It asks “Can Liz Truss outlast this lettuce?” — which, five days in, is gradually turning brown.

Truss initially tried to stay the course after her government’s package of 45 billion pounds ($50 billion) in unfunded tax cuts spooked the markets, pushing up government borrowing costs, raising home mortgage costs and sending the pound plummeting to an all-time low against the dollar. The Bank of England was forced to intervene to protect pension funds, which were squeezed by volatility in the bond market.

Under intense political and economic pressure, Truss last week fired her ally Kwasi Kwarteng as Treasury chief, replacing him with the Cabinet veteran Jeremy Hunt, who had been sidelined since 2019.

On Monday Hunt scrapped almost all of Truss’ tax cuts, along with her flagship energy policy and her promise that there will be no public spending cuts, saying there are “many difficult decisions” to be made before he issues a medium-term fiscal plan on Oct. 31.

The market for British government bonds and the pound weakened Tuesday as relief over the government’s about-face was tempered by the recognition that the new policies are likely to mean slower economic growth.

The pound fell 0.75% against the U.S. dollar to $1.1273 in late morning trading in London, after jumping as much as 1.2% on Monday. Yields on 10-year government bonds rose to 4.081% after dropping to 3.973% on Monday. Bond yields, which represent the return investors receive on their money, rise as a borrower’s creditworthiness decreases and decline when it improves.

“While one could argue that yesterday’s measures have stabilized the public finances in the short term and pulled the U.K. back into the pack as far as market perceptions of fiscal responsibility is concerned, one must question at what price to the economy next year,” said Michael Hewson, chief market analyst at CMC Markets UK.

With opinion polls giving the opposition Labour Party a large and growing lead, many Conservatives now believe their only hope of avoiding electoral oblivion is to replace Truss.

Under Conservative Party rules, Truss is safe from a leadership challenge for a year, but those rules can be changed if enough lawmakers want it. Some Conservative legislators also believe Truss can be forced to resign if the party can agree on a successor. But the many divisions in the party — whose factions range from hard-right Brexiteers to centrist “One Nation” Conservatives — makes that a challenge.

Truss’ defeated leadership rival Rishi Sunak, House of Commons leader Penny Mordaunt and popular Defense Secretary Ben Wallace all have supporters, as does Hunt, who many see as the de facto prime minister already. Some even want the return of Boris Johnson, who was ousted in the summer after becoming enmeshed in ethics scandals.

A national election does not have to be held until 2024, and a few Conservatives say Truss should be given a second chance. But lawmaker Charles Walker said that if Truss led the party into the next election, “I think we’ll be out (of power) for 15 years."

The chaos is unprecedented even for a country that has experienced plenty of political turbulence. Since the shock 2016 referendum vote to leave the European Union, Britain has seen years of bitter wrangling with the EU, two general elections and three prime ministers.

“British politics and economics is convulsed from time to time, as many countries are,” said Tony Travers, visiting professor in the Department of Government at the London School of Economics. “But the two coming together — where a political crisis effectively causes an economic one, which then the government has to try to bail itself out from — I think it’s pretty well without parallel.”