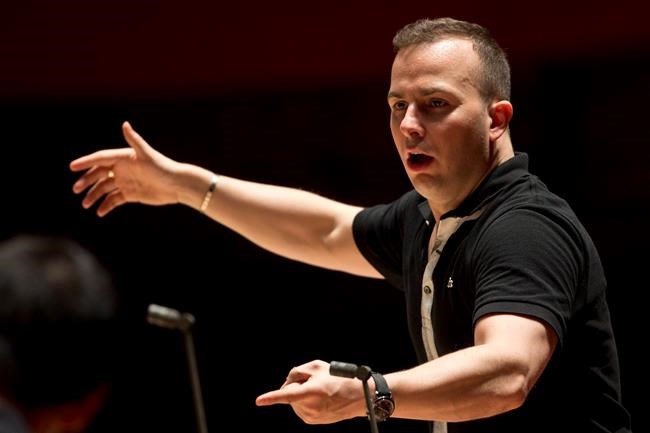 TORONTO — Classical conductor and pianist Yannick Nézet-Séguin is among the leading Canadian Grammy nominees this year with a strong showing from an array of other homegrown talents.

The Montreal native picked up five nominations across four classical music categories, which put him neck and neck with Serban Ghenea, who is up for record of the year for his mixing work on Mary J. Blige’s “Good Morning Gorgeous.”

Ghenea was born in Romania before he moved to Canada as a youngster, going on to build his name in the music industry, where he's scored 19 Grammy wins over his career.

Nézet-Séguin's nominations include best classical compendium for "A Concert For Ukraine," and two in the opera recording category — for "Aucoin: Eurydice" and "Blanchard: Fire Shut Up in My Bones."

Other big nominees this year included Toronto producer Boi-1da, born Matthew Samuels, who trailed closely behind with four nominations, including two in the album of the year category for Beyoncé's "Renaissance" and Kendrick Lamar's "Mr. Morale & The Big Steppers."

The hitmaker, who built his name crafting songs with Eminem, Drake and Kardinal Offishall, also earned nods for producer of the year, non-classical, and best rap song for work on "Churchill Downs" by Jack Harlow.

Drake pulled in three nods, even though he's boycotted the Grammys in recent years by not submitting his own work. He still managed to pick up a mention in the album of the year category for his contributions to the song "Heated" on Beyoncé's nominated album.

The Toronto rapper also held two nominations for best rap song, one which he shared with Samuels for Harlow's track and another for his appearance on Future's single "Wait For U."

And Bryan Adams pocketed a nomination for "So Happy It Hurts" in the best rock performance category.

Arcade Fire's "We" landed recognition for best alternative music album, a vote of support from the music industry at a troubled time for the Montreal band as they push forward with a tour. Lead singer Win Butler is facing multiple allegations of sexual misconduct that he has denied, saying all encounters took place between consenting adults.

Winnipeg-born mixing engineer Jesse Ray Ernster is in the running in the record of the year category for his work on Doja Cat's "Woman."

Allison Russell from Montreal has been nominated for best American roots performance for her contributions to "Prodigal Daughter," alongside Aoife O'Donovan.

In the best music film category, Justin Bieber grabbed a nomination alongside the team behind his "Our World" feature-length concert film, while Neil Young became a contender for "A Band A Brotherhood A Barn," a documentary that traces the recording of the Neil Young & Crazy Horse album "Barn."

And the creators who put together a project celebrating late legendary Toronto pianist Glenn Gould earned Grammy recognition. "The Goldberg Variations - The Complete Unreleased 1981 Studio Sessions" is up for best historical album.

The 65th Grammy Awards will hosted by Trevor Noah and broadcast Feb. 5 on Citytv and CBS.

This report by The Canadian Press was first published Nov. 15, 2022.

Note to readers: This is a corrected story. A previous version erroneously referred to Yannick Nézet-Séguin as a composer. He is a conductor and pianist.