Chinese president warns Trudeau, charges that he ‘leaked’ details of talk to media 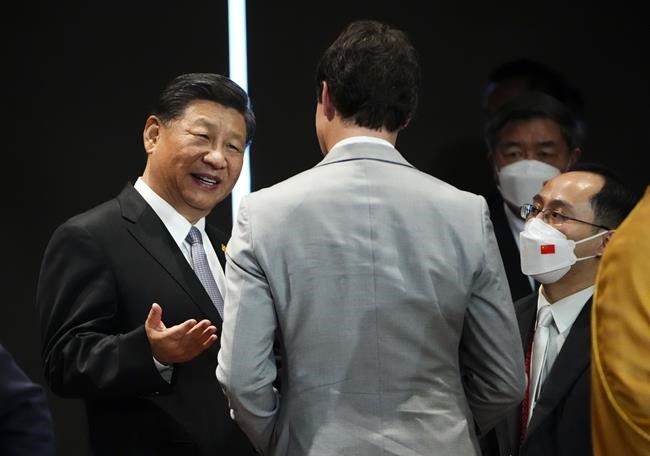 BADUNG, Indonesia — Chinese President Xi Jinping confronted Prime Minister Justin Trudeau on Wednesday, accusing him of harming diplomatic relations by sharing details with the media about their meeting and then warning him in untranslated remarks there could be consequences for a lack of respect.

"Everything we discuss has been leaked to the paper; that's not appropriate," Xi told Trudeau through an interpreter who was with Xi when the pair met at an event during the G20 summit.

Media were able to record the brief conversation after a journalist spotted the two leaders speaking together from across the room and moved closer to capture the encounter on camera.

"That's not how, the way the conversation was conducted. If there is sincerity on your part --" Xi continued, as relayed by the interpreter, at which point Trudeau interrupted.

Before the interpreter had started sharing that part of the remarks, however, Xi had gone on to say something in Mandarin that ended up not being translated into English for Trudeau to hear.

"We should have conversations in a respectful way," Xi said in Mandarin.

"Otherwise, the results can't be predicted."

When Trudeau cut in, which was before that part of Xi's message was translated, he said: "We believe in free and open and frank dialogue and that is what we will continue to have. We will continue to look to work constructively together, but there will be things we will disagree on."

Through the interpreter, Xi responded: "Let's create the conditions first."

The two shook hands after the exchange, and Trudeau headed for an exit.

Trudeau had spoken with Xi on Tuesday, and the Prime Minister's Office said afterward that he had raised concerns about Chinese "interference" in Canada.

His office added that the pair had also discussed Russia’s invasion of Ukraine, North Korea and climate change, during a short meeting in a crowded room at the summit. It routinely shares details of Trudeau's conversations with other world leaders, either through official readouts that are published online, or through briefings to the media.

The Chinese Embassy in Ottawa declined to comment on Wednesday, saying "we have nothing to share at the moment."

Trudeau would not specify what type of interferencehis office meant, butthe comment follows claims of Beijing running de facto police stations in Canada, and of China reportedly meddling in the 2019 general election.

In early November, the RCMP confirmed it is investigating reports of criminal activity related to so-called "police" stations that a human rights group said China is operating within Canadian borders.

In a separate case, a former employee of Hydro-Québec became the first person in Canada to be charged with economic espionage this week after police arrested him for allegedly obtaining trade secrets for the Chinese government.

And a House of Commons committee moved to launch an investigation into possible election interference this week after a Global News report earlier this month cited unnamed sources to allege that China was behind a foreign interference campaign and had funded a secret network that included at least 11 candidates in the 2019 federal election.

Conservative foreign affairs critic Michael Chong said outside a caucus meeting on Wednesday that he felt Trudeau was "unprepared" to represent Canada's interests and values at the summit.

"Instead of having private conversations with President Xi, whose government has meddled in our democracy, (the) prime minister needs to be accountable to this House and publicly tell Canadians who these 11 candidates are so that we can take action to ensure that doesn't happen again in the future."

Trudeau did not elaborate on the comment on Wednesday and would not say whether he had agreed to keep the conversation between him and Xi private, and he chalked the incident up to different expectations of transparency.

"Canada trusts its citizens with information about the conversations that we have in their name as a government," he told reporters in English.

"There's a reality, that our systems are very different," he added in French.

Trudeau repeated his government's view that Canada can work with China on issues like biodiversity, but that the country represents a threat to global stability by undermining global norms spanning trade to human rights.

"I won't shy away from being open with Canadians, even as we discuss important and sometimes delicate subjects," Trudeau said in English.

He added it's a matter of "getting the balance right between being open about disagreements and issues we raised, while being able to work constructively."

In Ottawa, Industry Minister François-Philippe Champagne said he was "pleased" that Trudeau "is standing up as he always does for Canada" and saying "that we won't tolerate these type of things with respect to interference."

Chong said it's a sign that the Canadian government "is slowly waking up to the threat that we have for years been calling on them to take action on."

He said it's long past time for Trudeau's government to come forward with a clear policy in the region. Foreign Minister Mélanie Joly is expected to unveil an Indo-Pacific strategy soon.

Conservative MP Chris Warkentin, the party's deputy whip, only said: "That was something, wasn't it."

This report by The Canadian Press was first published Nov. 16, 2022.

— With files from Nono Shen in Vancouver and Stephanie Taylor in Ottawa.