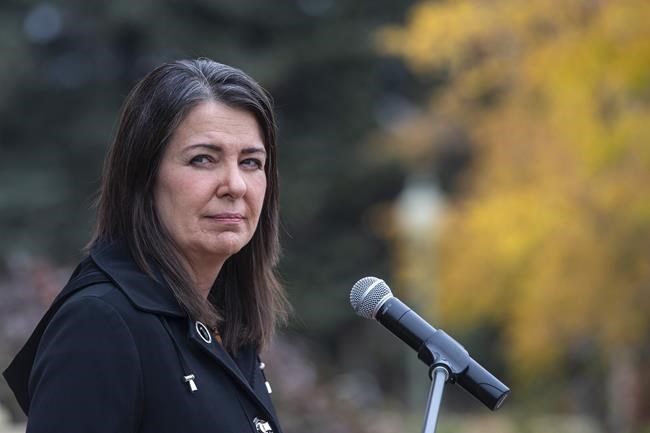 EDMONTON — A health system leader fired by Premier Danielle Smith has fired back in an open letter, saying her abusive, divisive attacks, blended with “warped” anti-science beliefs, make her a poor excuse for a leader and one literally putting Albertans in harm’s way.

“(Albertans) are entitled to governance that is principle-based, respects decency and inspires confidence in its citizens," Tony Dagnone said in the letter issued Friday.

He was one of 11 members of the governing board of Alberta Health Services recently fired by Smith.

"The current premier defies all those aspirations as she spews wacko accusations at Alberta Health Services and its valued workforce," he wrote.

The premier has chosen to "play to her misguided followers who rant against science and academic medicine under the veiled guise of freedom," Dagnone said in the letter.

“Her warped stance on COVID, which I remind the premier was and is a public health issue not a political punching bag, is nothing short of borderline dereliction when the lives of AHS staff and Albertans are at stake," Dagnone wrote.

“In light of her unhinged public pronouncements, the premier represents the bleakest of role models for women who aspire to be accepted in positions of influence and leadership.

“Why would any self-respecting graduate pursue their health-care vocation in a province led by an anti-science premier?”

He and the other AHS governing board members were fired Thursday by Smith, fulfilling a promise she made in her successful summer campaign to win the leadership of the United Conservative Party and become premier.

The 12th board member, Deborah Apps, quit after Smith won the UCP leadership race in early October, citing concern for the disruption Smith promised to impose on a fragile health system.

Alberta Health Services is the agency of more than 100,000 staff tasked with delivering front-line care in the province.

Smith blamed both AHS and Dr. Deena Hinshaw, the chief medical officer of health, for bad advice and execution in the pandemic, leading to jammed hospital wards and forcing the province to impose freedom-limiting vaccine mandates and passports.

Hinshaw was removed from her job earlier this week.

The board has been replaced by Dr. John Cowell, who is charged with fixing multiple stress points in the system, including surgery wait times, ambulance bottlenecks, doctor shortages and overcrowded emergency wards.

Dagnone, an Order of Canada winner with four decades of work in hospital and health administration, said he has no political affiliations and felt compelled to defend AHS staff.

“I witnessed the extraordinary collective will of our health-care providers confronting the unimaginable COVID,” he wrote.

“All deserve our respect and gratitude, however, the premier chooses instead to vilify those who were saving Albertans.”

Smith spoke Friday at a meeting of the Calgary Chamber of Commerce but declined to speak with reporters. Her office, in a statement, said the province had to take action to address pressing issues in the health system.

"This decision (to fire the board) was not personal, this is about better outcomes for Albertans, and we are grateful for the work done by the AHS board," reads the statement.

Earlier this month, she announced she wants to hear from Paul Alexander, a controversial critic of mainstream science who has characterized COVID-19 vaccines as “bioweapons.”

"The premier is taking her nonsense to a new level by inviting a former Trump adviser (Alexander) who has been universally scorned for promoting medical quackery,’ wrote Dagnone.

“If (she) persists in vocalizing false, conspiratorial and unfounded claims, she will be responsible for putting health-care providers and Albertans needlessly in harm’s way.

“Her loose and corrosive words appear to satisfy her need for bizarre musings that can and will ultimately impact people’s lives.”

“(Smith) will continue to blame health-care workers for the current state of care while taking no responsibility herself for the impact of the dangerous misinformation and conspiracy theories she promotes,” Shepherd said.

“Her reckless politicization of our public health-care system will make it harder to recruit and retain health professionals and for Albertans to access care.”

This report by The Canadian Press was first published Nov. 18, 2022.