Prime Minister Mackenzie King appointed a past Premier of Saskatchewan as his new Minister of Finance on this date in 1929. Charles A. Dunning, born in England in 1885, emigrated to Canada in 1901, at the age of 16.  He would later hold his province’s top political job from 1922 until 1926, served in Finance until the defeat of King’s Liberal government at the hands of R.B. Bennett in 1930.

King was returned to office as PM in 1935. The following year he prevailed upon Dunning to once again serve as Minister of Finance. Dunning agreed and was sent to the Commons in 1936 by acclamation via by-election and entered cabinet. He remained in cabinet until 1939 when ill-health forced him to leave politics. Dunning then became a successful business person. He was named Chancellor of Queen’s University in 1940 and made significant contributions, particularly in securing donations for the school, during his tenure.

Dunning passed into history in 1958. 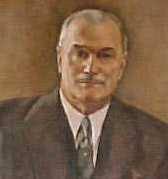