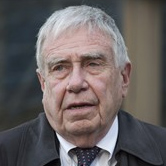 The Supreme Court and the carbon tax: Judicial activism, good decision or both?

Apr 19 2021 — Bruce Carson — National Newswatch — The Supreme Court of Canada ruled March 25 the federal Greenhouse Gas Pollution Act of 2018 was constitutional with six justices in the majority and three in dissent to settle a three-year jurisdictional dispute between Ottawa and the provinces over the carbon tax. There were a number of routes the majority could have taken to […]