Sep 2 2021 — Zainab Al-Mehdar — Hill Times — Facing tough losses and tight races in past elections, at least 22 former MPs are running to win back their seats during this snap election. Liberals, with nine, make up the most former politicians mounting a return effort (though one was a former NDP MP), followed by eight NDP candidates, three Conservatives, and two People’s […] 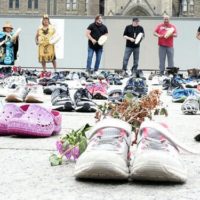 ‘This time may be different’: pollsters track ‘record’ shift in core public attitudes and a moral imperative to do something, after Indigenous children’s remains found

Jun 24 2021 — Zainab Al-Mehdar — Hill Times — Pollsters say the discovery of the remains of 215 Indigenous children found in May at the site of the former Kamloops Indian Residential School in British Columbia has significantly shifted core public attitudes and Canadians are engaged, angry, and want governments to act. And on June 24, the Cowesses First Nation said it found 751 […]