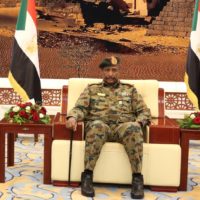 Aug 22 2019 — Aljazeera.com — A new prime minister and a sovereign council with military and civilian members have been sworn in Sudan, ushering in a new era in the country following months of political uncertainty and violence.

Sep 10 2016 — Antonia Zerbisias — Aljazeera.com — Last week, Canadian Conservative MP Kellie Leitch, former minister for the status of women in Stephen Harper’s cabinet, hit voters with a “survey” asking if immigrants should be vetted for possible “anti-Canadian values”. The punchlines – even from fellow Conservatives – were predictable. Could “anti-Canadian values” mean disdain for the diluted brew that passes for […]

Thanks for the memories, Stephen Harper

May 30 2016 — Antonia Zerbisias — Aljazeera.com — There’s no question that Stephen Harper, Canada’s former prime minister, will be leaving a legacy when he quits parliament this summer. A political mastermind, he united the country’s fractious right in 2003 when his Conservative Party of Canada (CPC) was born. In 2006, he led it to the first of its three successive electoral victories. […]