Moe fails to explain issues in eagerness to bash Trudeau

Sep 24 2021 — Murray Mandryk — Leader-Post — There is a legitimate beef here, if you can get past Moe’s politicking and incoherence messaging. For every reaction to a Trudeau there is an equal — or even more — negative reaction. You don’t exactly have to be Sir Isaac Newton or Albert Einstein to figure out Premier Scott Moe’s theory of political relativity […] 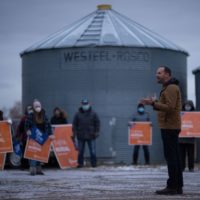 Apr 29 2021 — Leader-Post — The Saskatchewan NDP has finished dissecting its disappointing performance in the 2020 election, pinning it in part to scattershot messaging and a failure to connect with working-class voters. “We were solidly defeated for the fourth time in a row,” said a five-member panel that conducted hundreds of hours of interviews and meetings to reach a […] 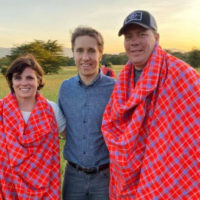 ‘There is no conflict here’: Premier Moe knew of WE proposal but denies role in process

Jul 15 2020 — Leader-Post — Premier Scott Moe rejected any comparison between his links to WE Charity and a conflict of interest scandal involving the organization that has landed Prime Minister Justin Trudeau in hot water. Moe’s government is moving forward to negotiate a roughly $260,000 contract with WE for a pilot of a student well-being program. The premier said […]

May 7 2020 — Leader-Post — It’s sometimes said that “a crisis is a terrible thing to waste”, meaning we need to learn from painful situations to avoid repeating past mistakes, and in rebuilding our lives after disaster has struck, we should build back better than what was there before. To prevent the COVID-19 pandemic from claiming tens of thousands of […]

Sask. election may mark a turn to the nasty

Jan 21 2020 — Murray Mandryk — Leader-Post — It’s still unlikely to come anything close to the nastiness we will see south of the border this fall, or even the unpleasantry we saw last fall in our nation. The 2020 U.S. Presidential election will be something to behold, given the nasty political times and given that America is experiencing one of the most […] 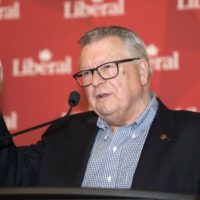 How to make progress on prairie priorities?

Nov 16 2019 — Ralph Goodale — Leader-Post — The regional nature of Canadian politics, as played out in the recent federal election, presents both Conservatives and Liberals with serious challenges. Voters in an angry mood in Saskatchewan and Alberta wagered all their parliamentary seats (except one in Edmonton) on the Conservatives forming government. But that approach foundered when Andrew Scheer failed to generate […] 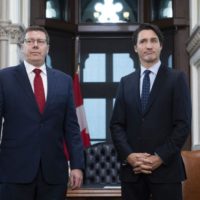 Separatism not the answer, says Moe, while refusing to denounce views

Nov 15 2019 — Leader-Post — Premier Scott Moe isn’t ruling out any options for bolstering Saskatchewan’s autonomy within Canada, as he faces renewed calls to distance himself from separatist views that have surged since last month’s federal election. He made clear that he doesn’t think western independence is “the way forward” but refused to condemn increasingly vocal demands to break […]

Nov 10 2019 — Murray Mandryk — Leader-Post — We are still waiting for an unequivocal condemnation of western separation from Saskatchewan Premier Scott Moe. That means more than getting Trade and Export Development Minister Jeremy Harrison to say, “We are not in favour of separation. period.” It needs to come from the actual Saskatchewan premier, and — evidently — it’s going to have […] 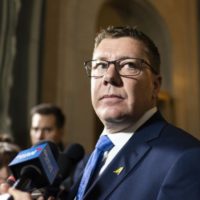 Oct 29 2019 — Leader-Post — Premier Scott Moe is offering to go to Ottawa for a meeting with Prime Minister Justin Trudeau and push his “new deal for Canada” as a way of dampening an apparent surge of western separatist rhetoric he hasn’t explicitly dismissed or condemned. In a scrum with reporters on Monday to mark the opening of the […]

Sep 7 2019 — Murray Mandryk — Leader-Post — If the federal NDP loses party status in the House of Commons after the Oct. 21 vote — unthinkable a decade ago, but at least worthy of discussion now — fingers will be pointed at what’s gone on in Saskatchewan. Certainly, the Erin Weir saga in Regina Lewvan speaks to a dysfunctional federal party lacking […] 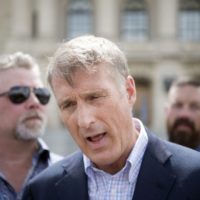 Jul 30 2019 — Leader-Post — A Maxime Bernier rally should begin with the national anthem, and no one’s shy about singing the original lyrics. They enunciate them clearly: “In all our sons command.” Some hold their hands on their hearts. One man raises his in the air. Lionel Fauchon dutiful removes his People’s Party of Canada ball cap and stands […] 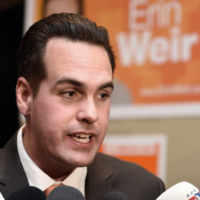 Jan 31 2019 — Leader-Post — The federal NDP still vows to block Erin Weir from running for his current seat under the party’s banner, but his riding association is now throwing its weight behind his quest to try. In a Wednesday night AGM at Regina’s Italian Club, the Regina—Lewvan NDP Electoral District Association voted in favour of allowing Weir “to […]

Jan 11 2019 — Murray Mandryk — Leader-Post — Prime Minister Justin Trudeau came to Regina Thursday night to talk about jobs and the economy. There was no planned announcement. There was no scheduled meeting with Saskatchewan Premier Scott Moe to sort out differences on the carbon tax and other issues crucial to this province. (For this, Moe is far more at fault than […] 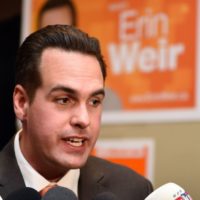 Weir debacle clearly splitting the NDP between young and old

Sep 8 2018 — Murray Mandryk — Leader-Post — With a federal election a year away, Andrew Scheer’s Conservatives are champing at the bit to displace Justin Trudeau’s Liberals — a realistic possibility. And notwithstanding its bungling of the Trans Mountain Pipeline, recent polls suggest internal Conservative bickering and its stance on NAFTA may be enough for a second Liberal government term. Where, though, […] 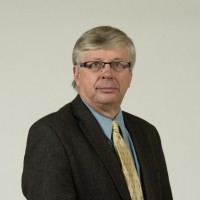 Wall driving off with his licence plate dangling behind him

Jan 24 2018 — Murray Mandryk — Leader-Post — In one’s dramatic drive off into the sunset, it’s preferable not to veer into the ditch. Brad Wall ‘s exit west — his Saskatchewan licence plate scraping the pavement as it dangles off his rear bumper — has not been quite the perfect, graceful departure that many expected. For this, there is no one to […]