Premier Ford: You need to change more than just your players

Jul 2 2019 — John Milloy — TheSpec.com — It’s not the best of times for Ontario’s Progressive Conservatives. As they begin their second year in office, the Ford government is trailing in the polls and the premier keeps being booed at public events. Although the recent cabinet overhaul and subsequent departure of the premier’s chief of staff may help, a big part of […] 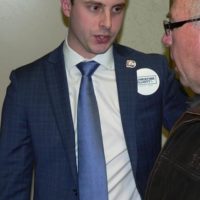 Feb 20 2018 — TheSpec.com — The Progressive Conservatives’ provincial nominations committee has rejected Hamilton candidate Ben Levitt’s request for a second vote after his May victory was disputed by others seeking the nomination. “His request was considered and declined. We have full confidence in Ben Levitt and his riding association,” Ken Zeise, co-chair of the committee, said Tuesday. Last week, […]